Wayne Bennett looks set to poach his first South Sydney player with Mark Nicholls in line to receive an early mark to leave Redfern to join the NRL newcomers.

As Storm premiership winner and New Zealand international Jesse Bromwich became the latest player to pledge his future to the Dolphins, the Herald can reveal Nicholls will be confirmed as the Redcliffe club’s latest signing next week. 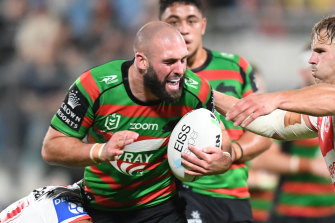 Nicholls, often referred to as the “GOAT”, or greatest of all time, by his Souths teammates, was shown plenty of love by Bennett, who even elevated him to captain for the final game of the regular season last year.

“Players love playing with him, and that’s the greatest honour you can get as a football player,” Bennett told the Herald at the time. “Mark is a great story. He’s a story of persistence and never giving up.”

When asked about reuniting with the veteran front-rower, who will be 33 by the time he debuts for the Dolphins, Bennett told the Herald on Friday: “There’s a possibility.

“We’re starting the team from scratch, we need men with good reputations on and off the field, and who are known for their mateship, their ability to get on with other players in the team, and it’s a great place for us to start.

“Young players learn from the old players, that’s how it works. They learn the good habits or bad habits, so you need the players with good habits.” 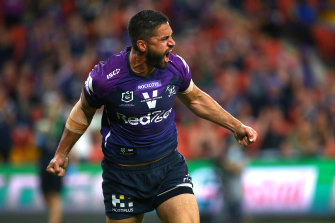 Jesse Bromwich will join Wayne Bennett and the Dolphins for 2023.Credit:Getty Images

Nicholls signed a two-year extension with Souths at the end of last season, but the club is likely to allow him to leave a year early to secure a better, longer deal in Brisbane. Souths ware happy for Nicholls to rejoin Bennett, with his new deal expected to be for 2023 and 2024.

Despite his age, Nicholls has a brilliant work ethic and has never been in trouble off the field. When Bennett arrived at Souths it was Sam Burgess who told him why Nicholls was worth keeping.

Relocating to Queensland last year for the second half of the season appealed to Nicholls’ partner Perrie, which made the decision to head north even easier.

Like Nicholls, Bromwich, also 33 next year, and Felise Kaufusi, who turns 30 in 2023, will roll their sleeves up and be the kind of players to drive the standards Bennett will demand in their start-up year.

Bennett has repeatedly said he is in no rush to sign players for the sake of it and is happy to bide his time and wait for the right players to emerge.

As for securing Bromwich on a two-year deal, Bennett said: “I’ve always admired him greatly for the way he has played the game and way he has conducted himself. I’m very happy and pleased he’s coming.

“I’ve never worked with him. But we know what he does on the field, but he’ll have a huge role for us on and off the field.”

Bromwich kept Melbourne informed throughout his negotiations with the Dolphins, and the Storm were unable to match the offer from the 17th franchise, which was understood to be about $1.3 million over two years.

Dolphins chief executive Terry Reader said of the Bromwich news: “He has been one of the shining lights of the strong Storm system for the last decade so will bring a tremendous level of professionalism with him. Jesse has been a part of three NRL grand final victories and has played 29 Tests for New Zealand, so we know he is a winner.”