If anyone understands State of Origin better than Phil Gould, then maybe it’s Wayne Bennett.

So, what would the veteran coach think of two of his most important players, Latrell Mitchell and Dane Gagai, prodding, pushing and generally hating each other all night before South Sydney steady themselves for a title charge?

Because now the Rabbitohs have joined every other Sydney club in relocating to south-east Queensland to save the NRL season, Mitchell and Gagai will see each other nearly all day every day. To be a fly-on-the-wall at breakfast on Thursday morning.

In one of the most spiteful match-ups between clubmates in recent Origin history, Mitchell and Gagai were at each other like they had a decade-long feud. And while the Rabbitohs try to keep the off-contract Gagai at Redfern beyond this season, has anyone bothered to ask Mitchell if he wants him to stay?

“I love ‘Gags’, [but] I don’t show no respect on the field, that is how I play,” Mitchell told Nine. “After it, we show we’re brothers again. He is my teammate back in club land, I love him. In this arena, we’re not mates.”

His team might not have won the final battle – Queensland avoiding series embarrassment with a nervy 20-18 win on the Gold Coast on Wednesday night – but Mitchell can lay claim to winning the Origin war. 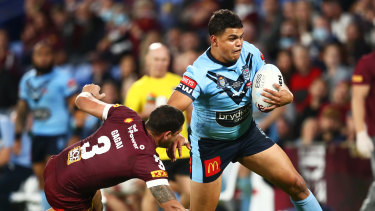 That’s even despite missing a monster 51-metre penalty goal inside the final two minutes, which would have levelled the game.

After the Blues’ record-breaking rout in Townsville, Mitchell spoke of making the state proud again. People living in NSW, he said, shouldn’t be supporting Queensland like he’d seen for so long. If he believes in a cause, it’s usually one he will stand up for.

“[It’s been a] long road to get here,” Mitchell said. “Had some ups and downs, but I love putting this jersey on. I put it on with pride. Every time I play, I enjoy it.

“Now I know what it takes to be a Blue and you know yourself, putting that jersey on, it means everything in the world. As a kid growing up, I wanted to play Origin and I got to do it three times this year in Queensland.”

For NSW’s first points on the Gold Coast, Mitchell sprung off his left foot to leave Gagai clutching at air. Kalyn Ponga, in cover, had raced so quickly across the field he couldn’t lay a hand on Mitchell by the time he had broken the line, prompting Andrew Johns to say the 24-year-old was making the best players in the game “look silly”.

Like he did in Brisbane, Mitchell’s big plays weren’t just with ball in hand.

Daly Cherry-Evans learnt what Valentine Holmes did the hard way, throwing a pass he thought would find space only to find Mitchell’s massive mitts. The Souths star batted the ball back to a waiting Jack Wighton. It didn’t cost Queensland points this time, but the culprit was the same.

After the break, Mitchell went from hunter to the hunted. More specifically, he was Ben Hunted, the little Queensland No.9 driving into Mitchell’s ribs so hard he fumbled the ball. A few moments later, Hunt was diving over from dummy-half down the other end to give Queensland a lead they would never relinquish.

Paul Green and the Maroons will reflect on many mistakes they made this series, and not choosing St George Illawarra’s million-dollar man for game one is up there with them.

He was flown in at the 11th hour to Townsville and didn’t play, trudged off the bench behind Andrew McCullough for game two, and then gave a rousing speech to his crestfallen teammates after the series-deciding loss.