Noah Balta isn't especially political, but he was invested in Saturday's federal election. He is tribal more than political. It's in the family, you see.

Noah's dad, Ivan, is assistant secretary of the Electrical Trade Union. His family are union people, and Noah Balta is a big family man. 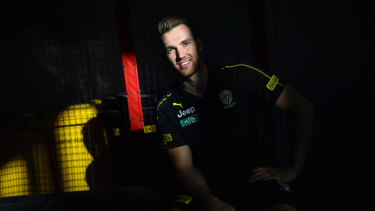 Noah of all trades: Balta has been the ultimate utility player for Richmond this season.Credit:Joe Armao

"There was a load of 'blood' cousins all around his age that all lived on the block he lived on."

Maric speaks of blood cousins and non-blood cousins. He is not related by blood to Balta, but through their tight Croatian community they think of themselves as cousins.

Balta grew up on a corner block in St Albans in Melbourne's working-class north in a townhouse that shared a wall with another townhouse built and owned by his uncle. His cousins still live next door.

The two brothers, first-generation Croatian migrants, bought the block and both built townhouses on it. On the block next door to theirs, more of their family have done the same thing. On the diagonal corner there are more cousins. Up the road, more cousins.

This is a little pocket of St Albans that they prefer to refer to in Croatian terms as a "selo", a village.

"It's like a bit of a Croatian Triangle, like the Bermuda Triangle, it's just full of Croatians in that area," Balta said.

"In that corner there is about six families in a couple of hundred metres; it's good, you don't even need to get in the car to go there you just walk over. It's like a 'selo'. Growing up I was always with my cousins."

Balta's parents were both born in Australia but their parents migrated from the Split and Vukovar areas of Croatia. His mum's older brothers were born in Croatia, the eldest involved in fighting there before the war forced them out and they eventually found their way to Australia by boat.

Balta doesn't speak fluent Croatian – that's his dream – but he understands more than he speaks. His grandparents speak broken English while he speaks broken Croatian. He knows and likes how the language sounds. 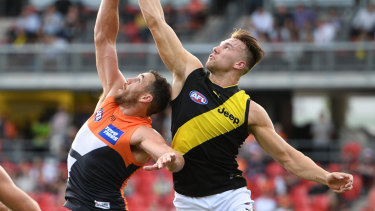 So firstly, in the wake of the Orazio Fantasia pronunciation kerfuffle, and just so there can be no confusion, Balta says his name is pronounced "Barlta" not "Bolter". He gets called "Bolter" a lot but prefers "Barlta".

Like Maric, who eventually won the battle to correct the Anglicised strangling of his name from "EYE-van Marik" to "EEEvan MARR-ich", Balta would prefer the tongue to roll the right Balkan way with his name.

Now they are at Richmond games, for there is no more passionate supporter than his mum and dad at a Richmond game.

His weekends growing up were spent playing both codes of football, and basketball, but when he wasn't playing sport he was hanging out at the Knights and Dinamo with his cousins and uncles. Occasionally the boys would even watch the game.

He is tribal that way. He adopted Melbourne Heart when they came into the new A-League because they were the red, like the Knights, where Melbourne Victory were the blue of South Melbourne Hellas.

Since Heart became City he has lost his passion for it. He still goes to watch Dinamo and the Melbourne Knights where he has friends playing.

How he happens to now be playing AFL – and not A-League – and be a Richmond player is in part informed by the fact he is Croatian.

Years ago when he was playing for Doutta Stars, Maric would go along to watch Balta's cousin who was a very good footballer and basketballer (he is now 210 centimetres tall and playing college basketball in Honolulu on scholarship). He got to know Noah and his family.

He played for Calder Cannons and Vic Metro and while he was athletic, he was very undeveloped as a player.

Maric had just retired but he went to Tigers list manager Blair Hartley and recruiter Francis Jackson ahead of the draft and said: "Don't worry about how raw he is; I will look after him, he'll be OK."

Maric is a hard man to refuse. They took Balta in the second round with pick 25 in the 2017 draft. 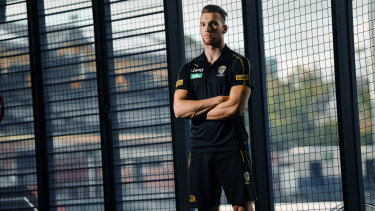 The Balta family are now passionate Tigers, and Balta devoted to the team.Credit:Joe Armao

But he is right. As a physical specimen Balta is very fast and strong like Rance with a good leap and a strong overhead mark. Still, all Richmond fans heard was "the new Rance".

He's not that. What he will be is anyone's guess.

Last week he was the next ruckman. When Toby Nankervis went down injured against Fremantle it fell to Balta to carry the ruck with short breaks from Nathan Broad.

Cats great Jimmy Bartel reckoned the game revealed that Balta, a player without a position really beforehand, could have found his position as an undersized but athletic ruck. Last week was reminiscent of when Paddy Ryder on won the Anzac Medal in 2009 after David Hille went down and Ryder had to ruck all day.

Balta isn't Ryder's height. Balta is listed at 194cm which makes him a tick under Blues skipper Paddy Cripps' height. He thinks he is now a centimetre or two taller than the stats have him. But he has a good leap and likes being around the ball with the freedom to play.

"I am a bit of a brumby at the moment so when the ball is right there I am good but when I slowly start getting further and further from the ball I get a bit confused on where to run, where should I be. I know 'Dimma' likes in the ruck because my second and third efforts are good," Balta said.

"I think 'Dimma' prefers me around the ball for a while. Whatever happens happens. Wherever 'Dimma' throws me that's where I'll go. You've seen me play all positions, you have seen me play back, forward, ruck in one game."

Maric is reluctant to nominate what Balta will end up being.

"He has the body of a 25-year-old. He has a lot of skill and athleticism. He could play nearly any position on the ground and there's not many players in the league who could do that. He is so quick and [has] got a great leap," Maric said.

"I am not putting a label on him yet of what position he plays."

Maric is close with Balta now. Maric's actual cousin, Ivan Soldo, another Croatian, is likely to ruck with Balta. He has a special bond with both of them.

Yet he is slightly disappointed with Balta. When Balta arrived at the club with a shaped mullet hair-do, Maric nodded respectfully. He thought he had him. But no – Balta cut his hair again soon after and the mullet was gone.

"Disappointing," Maric said of the decision to abandon the style that, like a moustache, is more a statement and way of life than a haircut.

It might be the only area of Balta's life where someone can question his commitment.