North Melbourne haven't given up on the injured Ben Brown playing again in 2020.

The key forward remains sidelined with a knee injury, his last game coming in the Kangaroos loss to Geelong in round 10. 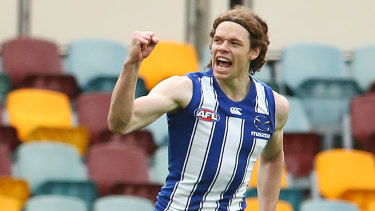 Out of contract at season's end, Brown has played nine games for the year but like his team has stuggled to find good form and was dropped earlier in the year.

Kangaroos coach Rhyce Shaw said on Saturday the club had not yet chosen to send him in for surgery or give him the rest of the season off.

Shaw said Brown's knee swelling was improving and that he took a step forward with a running session on Saturday.

"I don’t think it is at that point [season over] yet," Shaw said. "We have got 10 blokes out for the year so that is a really tough one.

"We are just working with Ben. Ben wants to play, we want him to play but we have just got to see how it goes.

"It’s assess every training session, how he pulls up.

"We are not going to risk anything but we are also going to give him the best chance to play.

The Kangaroos only had 28 fit players to choose from this week.

Captain Jack Ziebell (hamstring) has also had an injury interrupted season and Shaw said he would be available to play "pretty soon".

"He trained really well yesterday," Shaw said. "We will hopefully get through and pull up all right … and just see where that fits next week."