Adam Saad has become a Carlton player and Essendon now have three picks in the top 10 of the national draft.

Carlton and Essendon finally struck a deal to send Saad to Essendon for pick eight and an exchange of late draft picks on Wednesday morning. 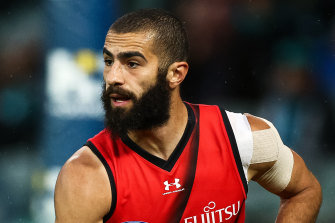 The Blues have landed Adam Saad after finally doing a deal with Essendon.Credit:Getty Images

The deal has Saad and Essendon's picks 48 and 78 going to Carlton. The Blues will send pick 87 to the Bombers.

Essendon now have picks six, seven and eight in the national draft, their strongest hand in years. The Bombers though are still negotiating other deals and will likely trade one or more of those picks.

The deal also means Essendon have been able to hang on to their future second-round draft pick (they do not presently have a second-round pick in this year's draft).

Essendon had been firm that Saad deserved pick eight alone while Carlton believed that was too much and required something else back in the exchange. Carlton had pushed to hand over pick eight and a future third-round pick to Essendon for Saad and Essendon's future second-round pick – a pick slide next year for Essendon.

But that future second-round pick was too valuable to Essendon because of the other deals they are trying to negotiate in this year's trade period.

Out-of-contract young Giants midfielder Jye Caldwell has asked to be traded to Essendon and the Bombers have been hopeful that their future second-round draft pick could get that deal done.

The Giants have already said that is insufficient compensation for the player, who was pick 11 in the draft just two years ago and had been injured in his first season.

Regardless, the future second-round pick will remain an important bargaining chip for Essendon in that deal or in the conversations with the Western Bulldogs over contracted midfielder Josh Dunkley.

Essendon had spoken with the Bulldogs about trading pick eight to them for Dunkley. Sources said that the Dogs were frustrated that Essendon didn't yet have that pick when they were offering it. They also felt that with picks six and seven in the draft, Essendon should be offering at least one of those picks if they wanted to secure their player who is contrcted for two more years and whom the Bulldogs want to keep.

For Carlton, finally dealing for Saad means they have landed their two prime targets this exhange period – Zac Williams and Saad. The pair will give the Blues great pace, outside run and good ball use.

Carlton also secured Lachie Fogarty from Geelong on Wednesday morning, with Geelong giving up Fogarty and pick 38 to Carlton for picks 30 and 51.

Fed Chair on stimulus: There's little risk of overdoing it