Greater Western Sydney football director Jimmy Bartel has leapt to the defence of embattled coach Leon Cameron, blaming basic skill errors for their disastrous AFL campaign and insisting there was "nothing sinister" behind the axing of captain Stephen Coniglio.

The Giants have slumped to ninth on the ladder after back-to-back defeats to Adelaide and Melbourne. They need a big win over St Kilda on Friday night, and other results to go their way, to reach the finals. 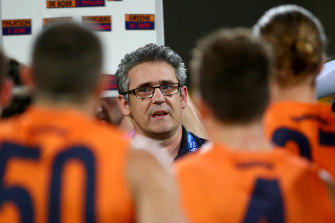 Leon Cameron is under fire for his controversial decision to drop captain Stephen Coniglio.Credit:Getty Images

Bartel also shielded Cameron from criticism over his tactics, reeling off four examples of mistakes from players that led directly to opposition goals in Saturday's five-point loss to the Demons.

"It sounds so simple and basic and we talk about it a lot … it's the fundamentals that hurt you the most, especially in big games," he said.

Cameron flagged the prospect of more big-name selection bombshells to come after the match on Saturday night, putting the likes of underperforming spearhead Jeremy Cameron firmly in the gun. 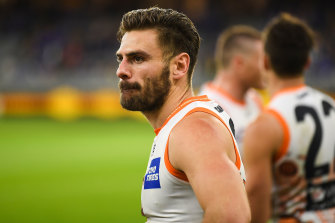 Stephen Coniglio was the first AFL captain in 22 years to be omitted for form reasons, not injury.Credit:Getty Images

Cameron, 27, is off contract at the end of the year and is yet to sign an extension. Essendon great Matthew Lloyd suggested dropping him could have massive ramifications on his future.

"You just wonder whether he won't be at the club next year if he is to be the one that misses round 18," Lloyd said on AFL.com.au's Access All Areas.

Port Adelaide premiership star Kane Cornes said the coach, who signed a two-year deal with the club last month, had effectively painted himself into a corner by his treatment of Coniglio and now had to drop Cameron, who has been a shadow of the player that won last year's Coleman Medal.

"If it's good enough to drop the captain then you probably are going to have to say goodbye to Jeremy Cameron at selection this week," Cornes said on SEN Radio.

"I couldn't question any of their effort at the weekend … in all the vital stats, they had a real dip, but they continue to be so ineffective going forward.

"They really do have to turn this around really quickly. Leon's extended his contract and it's got to be top four again next year, otherwise you can't make a case for Leon to continue after next year."

Vale Dean Jones, still with so much to give