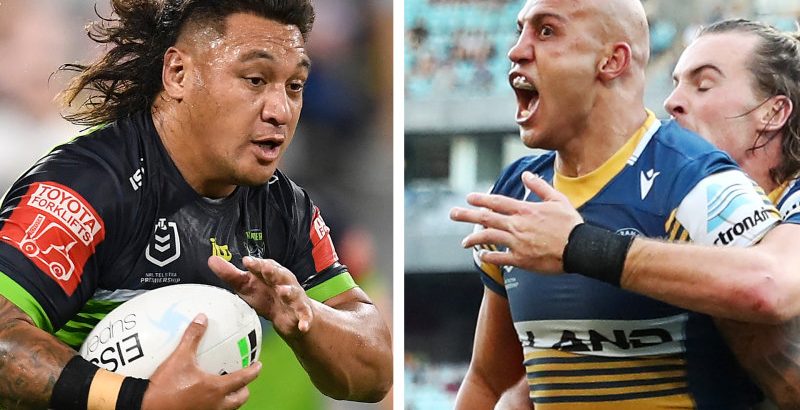 Big Josh Papalii is off the field for a head injury assessment.

It was hard to tell if ‘Papoa’ replaced his divot before making his way from the field.

Hoping all the wives and girlfriends and kids of the players are coping OK.

Been some disturbing stories about restrictions.

Can’t imagine what it would be like stuck in a tiny room for a couple of weeks with little ones and nowhere to go. Hang in there. The players appreciate it.

How would you pass the time for two weeks in a hotel? I’d do some yoga. Maybe drink a few beers. Maybe some push-ups. And I’d shower for hours.

We’re still scoreless and if we’re being fair dinkum, neither side has really looked like threatening.

Canberra were caught with the ball on the final tackle with their only real attacking set, and the Eels botched one try when Penisini’s final ball to Ferguson wouldn’t stick.

Wouldn’t it be nice to be on the Goldie right now instead of Sydney lockdown.

I had my experience of staying in a nightclub until sunrise for the first time on the Goldie. It was a joint called Melbas. I drank Kahlua and Milks. Then I call mum to tell I hadn’t been to bed from Maccas. Good times.

No Parra Points Yet

The Eels have been perfect with their completion but do not have any points to show for.

A Jakob Arthur kick was knocked on by Waqa Blake, ending any brief hope of Marata Niukore thinking he had the first four-pointer of the night.

The Raiders will grow in confidence if they keep turning the blue and golds away. 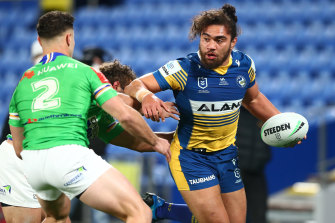 Isaiah Papali’i looks for an outlet.Credit:Getty

Oh no, Maika Sivo stays down after a stray arm from Corey Harawira-Naera.

We haven’t seen this sight before (OK, insert smiley face).

The big Fijian has been forced from the field for a head injury assessment while Harawira-Naera is not put on report. Good attacking chance for the blue and golds here.

Keep An Eye On Penisini

Sorry for the late start to the blog (plumbing issues on the home front).

How good is it to see Blake Ferguson back for Parramatta.

And keep an eye on debutant Will Penisini. He’s got big raps on him. He came through The King’s School.

Skipper Clint Gutherson told us earlier this year “the sky is the limit” for Penisini, while Dylan Brown added: “He’s a freak, he’s confident, he’s so smart, he has the looks, the face for it – he will do some big things.”

Any thoughts on who wins this? Parra? By 12?