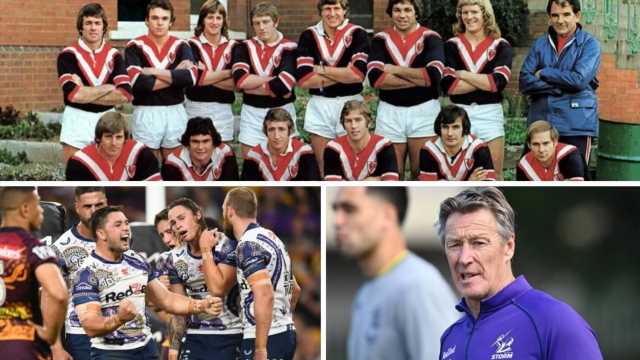 He’s universally known as Bellyache but perhaps a better moniker for Craig Bellamy would be Supercoach II.

Members of the history-making 1975 Eastern Suburbs side have compared Bellamy to the original Supercoach, Jack Gibson, as the Storm prepare to match their side with 19 successive wins on Thursday night.

Rather than suggesting the Storm side is inferior to their star-laden squad, Roosters legends from the club’s grand final-winning side have told of their pride at being ranked alongside the mighty 2021 Melbourne team.

The Storm will enter Thursday night’s match against Gold Coast at Cbus Super Stadium as red-hot favourites to notch their 19th straight win.

Among the Storm’s biggest fans are members of the 1975 Easts side, which was led by Arthur Beetson, coached by Gibson and won the NSWRL grand final 38-0 over St George.

“It’s a great privilege to be sitting next to them, to be in that situation,” Roosters legend Ron Coote said. “You can compare both eras I suppose and both teams have done really well to win that many games straight. Melbourne don’t let up.

“The Storm are a great football team and the other thing, you’ve got to compare Craig Bellamy to Jack Gibson. That’s a comparison that needs doing. Bellamy is a great coach, Jack was a great coach.”

The Roosters had some tight scorelines in their streak, including two one-point wins and 7-5, 7-4 and 6-4 results. While the Roosters topped 30 points just three times, the Storm have already scored that many in 13 matches.

Former Roosters centre John Brass said: “It’s an honour for the guys back from ’75 to be compared with this Melbourne side. Your memories fade but it’s great to be remembered alongside a team that is very, very special. Melbourne are remarkable, they’re so ruthless.

“They are like watching the All Blacks the other night, they just grind you into the ground. They don’t give you any space and time. They strangle you and then they’ve got strike players and speed everywhere. They can score from anywhere.”

The Storm will be shooting for their 19th straight win on Thursday night. Picture: Bradley Kanaris/Getty ImagesSource:Getty Images

“It’s a privilege to have a team like Melbourne hot on your heels and getting mentioned in the same breath, that same light,” Mayes said. “Melbourne just keep on keeping on. I love watching them play. I’m happy for what we did back then and good on Melbourne as well.”

Ian Schubert, who played fullback for the injured Russell Fairfax in the 1975 grand final, added: “To think we are close to being as good as they are, I’m pretty happy with that. They are a red-hot team.

“Looking back, if we were that good then we must have been okay too. It is a massive effort – 18 wins a row – and they deserve all the accolades they get. They are the best side we have seen for a long time – 18 wins in a row says that.

“I wouldn’t like to back against them. Going through to win the grand final would be the cherry on top. They are a great team all over the park, Craig Bellamy has done a wonderful job.”

Gibson’s Roosters are rated among the greatest club sides of all-time. To be remembered as one of the game’s greatest side Melbourne will have to emulate their feat and win this year’s grand final.

“As they say, the more wins you have in a row, the closer you are to a defeat,” Schubert said. “It’s not about how many you win through the year, it’s about winning the grand final. That’s what it’s all about.”

“The winning streak would be hollow if they don’t win it. If we won 19 games and got beaten in the grand final, no-one would remember us. Unfortunately people don’t remember who runs second.”

Mayes said: “From memory, we lost the first two games in 1975 – that wasn’t real flash — and Jack then gave us a rev-up and changed training. We then went right through until we lost the major semi-final against St George. That rocked us a bit. We were determined not to let that happen again.”