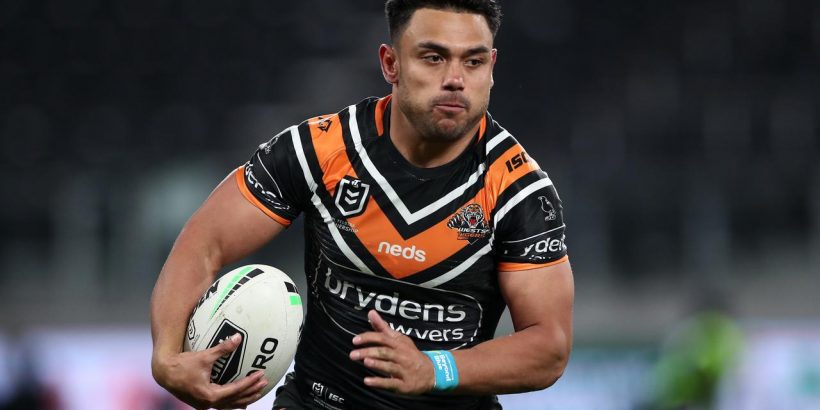 After playing with a hernia, Wests Tigers winger David Nofoaluma is pushing aside the pain of shin splints to help ignite the Tigers’ season as he prepares to play his 150th NRL game against the Warriors on Friday.

Nofoaluma has been a standout for the Tigers this season, scoring six tries and amassing an impressive 39 tackle busts in his 10 games to date.

For all his brilliance, he has been privately battling with his shin, which causes distress at training and during matches.

Nofoaluma could sit out a few games to rest, but after playing an extended period with a hernia, he knows he has the mental strength to push on.

“Yeah, it is just a shin splint, so it is manageable and nothing too serious,” Nofoaluma said.

Nofoaluma will also put his 150th game against the Warriors on Friday aside to focus on helping the Tigers claim consecutive wins.

Wests Tigers winger David Nofoaluma has been a standout for the Tigers this season. Picture: Bradley Kanaris/Getty Images.Source:Getty Images

The joint-venture club produced an impressive performance against Newcastle in Magic Round but must back it up to be considered a genuine threat this season.

Nofoaluma concedes the Tigers have often let their guard slip this season to become too comfortable.

“You can get easily complacent in the NRL, and I think we’ve done enough of that this year,” he said.

“It is just time to get back-to-back wins.

“A win is a good thing, and it creates confidence.

“I think for us it was just going back to basics at training and not overdoing things.

“That is what we did last week (against Newcastle). Everyone just went out there and focused on their individual roles, and in the game that showed.”

The Tigers’ consistency struggles is why Nofoaluma is also refusing to get distracted by his personal milestone.

“I’m not overly focused on myself in terms of the 150 … more so on getting the win for the boys,” he said.

“For myself, I look back at the journey and it is going to be exciting to play this week.”