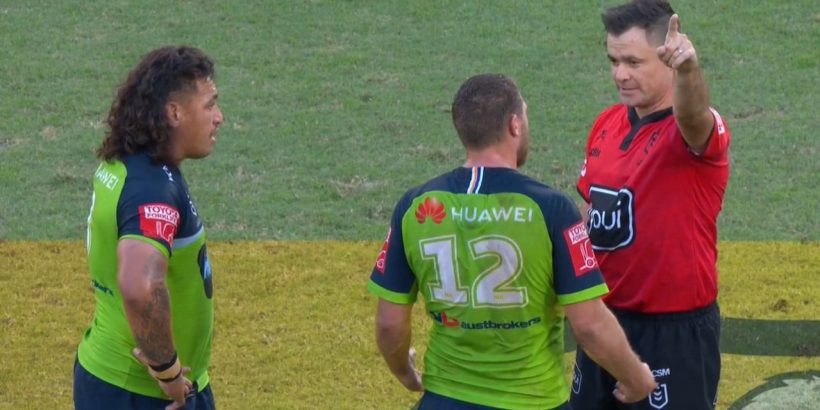 The Canberra Raiders’ Josh Papalii has been the first player sent off under the high shot foul play crackdown after a hit midway through the second half of their clash with the Canterbury Bulldogs.

It comes after eight players were sin binned in Friday night football with fans and commentators fuming over the crackdown.

The Raiders had already had Jack Wighton sin binned for a cannonball tackle.

It helped the Bulldogs hit the lead as Jake Averillo scored near the corner to take a 12-8 lead.

But the Raider who have had a shocking run of form of later, highlighted by second half capitulations to lose their last five straight, lost Papalii to a straight send off.

The Raiders were looking for something and Papalii and Josh Hodgson went for a big shot on Bulldogs winger Tuipulotu Katoa, but upon replay, Papalii had come into contact with Katoa’s head.

The send off tackle for Papalii.Source:FOX SPORTS

“There's a problem here, a very big problem for Josh Papalii who made direct contact with the head,” Warren Smith said. “This will be a sin bin at a minimum given the instructions from the NRL to the club during the week who said direct and forceful contact with the head and neck would be a penalty or more likely a sin bin or a send off.”

While in the past it may have gone on report or perhaps drawn a sin bin, referee Chris Butler felt he had no choice but to send Papalii off.

Cooper Cronk said that it was “almost impossible” when teams went down to 11 men, with the Raiders surviving three minutes two men down.

Smith added: “In reality, that’s the tackle they want out of the game.”

Despite a day of seeing what the crackdown would look like, fans were split on the send off.

This Papalii tackle is the sort we absolutely want out of the game. Absolute shocker. Get him off the field. #nrl

We've now got players telling the ref to get the video to look at something !!! Yep it wasn't good but this could get ridiculous #NRL#NRLBulldogsRaiders#MagicRound and this is coming from an @NRL_Bulldogs supporter

Easily the most justified punishment from incidents this weekend

How can you send a player off for unintentional contact?! It’s a mechanic that should be used for cynical and intentional play only. Use the bin if you must.. But this is too far. #NRL#NRLBulldogsRaiders

But that didn't stop the Raiders from mounting an incredible comeback.

With Wighton returning to the field, the 12 man Raiders scored through Curtis Scott pushing into the corner and Sebastian Kris crossing out wide.

Only a try in the final minute by Dogs fullback Dallin Watene-Zelezniak made it close for a grandstand finish but they couldn’t hit back, knocking on in their last attempt.

The Raiders have now snapped a five-game losing streak with the 20-18 win.