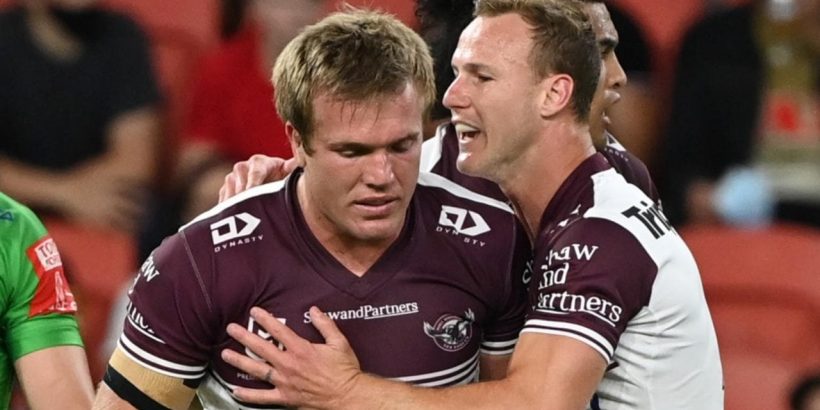 The Manly Sea Eagles’ supporting cast played their roles to perfection as they picked up two crucial competition points without their leading man to keep their top-four hopes alive.

The extent of Tom Trbojevic’s injury remains a mystery, but the only thing fractured right now is Canberra’s hopes of playing finals footy after their second-half fade-outs came back to haunt them in the 19-18 loss at Suncorp Stadium.

The intrigue surrounding Turbo’s availability dominated the headlines all week and had more plot twists than a Home And Away season finale. And with Turbo ruled out, nothing went to script for Manly in the first half without their leading man there to run the attack.

They had a try ruled out for obstruction, bombed a certain four points with an overweighted kick and had seven errors in the first half alone. They struggled to play width, and when they did, they were bundled into touch.

But the halftime break was their best friend and they fired in the second act to move level with the Roosters on 30 competition points, showing once and for all that they are more than just a one-man show.

They finish the season with matches against the Bulldogs and Cowboys which they’ll win by a cricket score with or without their star fullback.

Canberra fans must have had one eye on September after their side jumped out to a 12-0 lead at the break, but their finals hopes are now in tatters after yet another second half collapse.

It’s been the story of their season and has them stuck in ninth spot with two rounds remaining.

It looked like they had the perfect game plan to knock off the Sea Eagles for the second time this year, with Joseph Tapine dominating through the middle just as he did when the sides met in Round 17.

But they lacked a spark in the second half and didn’t have the answers to halt Manly’s momentum.

One positive was the return of Charnze Nicoll-Klokstad from serious injury, although his first touch was an error that led to a frantic Sea Eagles try two plays later.

He’s been linked with a move to the Dragons, but Moses Suli could be a wildcard in the run to the finals after he played his best game in years to spark Manly’s comeback.

He ran riot on the left edge, finishing with 210 metres and a stack of tackle busts as he exposed some lazy Canberra defence through the middle.

Suli was well supported by Haumole Olakau’atu who is the form back-rower in the competition. He scored Manly’s first try, had another ruled out for obstruction, forced a line dropout and produced a one-on-one steal.

Fittingly, skipper Daly Cherry-Evans iced it with a late field goal, which proved telling in the end after Nicoll-Klokstad crossed with 32 seconds remaining to bring the Raiders within a point.

The Green Machine actually had a chance to steal it when Josh Schuster was sent to the sin bin for a cynical penalty, but Jordan Rapana’s two-point field goal attempt barely got off the ground.