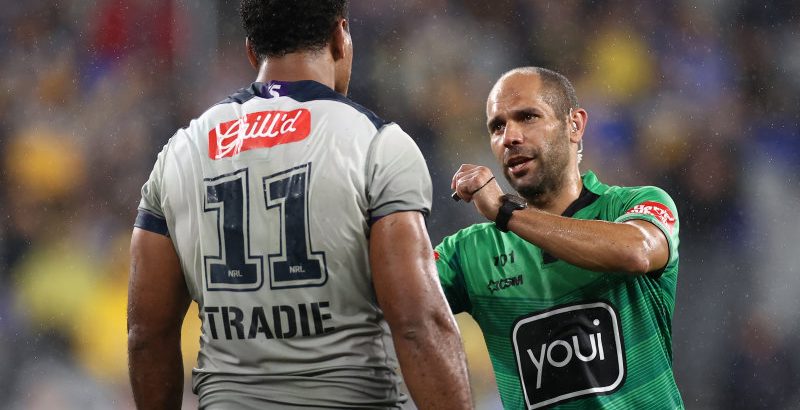 The NRL has labelled the number of charges being levelled at players for contact with the head as “unacceptable” as it plans to urgently address perceived inconsistencies with how offenders are punished on the field.

On the same day Bulldogs winger Dallin Watene-Zelezniak was offered a two-match ban for a wild shot on former teammate Nathan Cleary, NRL head of football Graham Annesley admitted to concern at how many players have been sanctioned for illegal contact with the head and neck in the opening two weeks of the season. 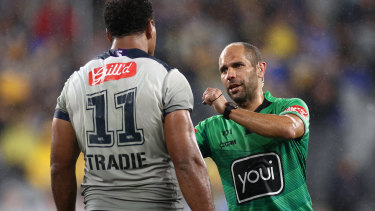 Felise Kaufusi was only put on report for his tackle on Ryan Matterson.Credit:Getty

And Rabbitohs fullback Latrell Mitchell was sin-binned for a minor professional foul against Manly, an offence not in the same league as the high shots leaving players concussed.

“They’ve got to be penalised on the spot,” former Broncos and Dragons enforcer Gorden Tallis told Triple M. “[The] inconsistencies with the referees … and you see what Kaufusi does and last weekend Jesse Ramien, which I thought should have been sent to the bin. If the referees are going to make mistakes I can live with them, but they need to be more consistent.”

Roosters back-rower Angus Crichton was suspended for a crusher tackle in the opening round and the Warriors’ Jamayne Taunoa-Brown (three matches) and Newcastle’s Phoenix Crossland (two) also face significant suspensions for also putting pressure on the neck of an opponent in a tackle.

The NRL strengthened its penalties for careless and reckless high tackles before the start of last season and introduced a separate crusher tackle charge midway through 2020.

Concussion experts have argued for even greater sanctions for foul play involving the head, but Conlon believes the NRL has struck the right balance.

“I don’t have a problem at the moment with the penalties that are presently available in the code,” he said.

“I think the reality is with the focus being on this type of contact now the coaches are going to be saying we need to play with a bit more care. We are seeing a lot of charges and hopefully that will die down.”

The long-term futures of Boyd Cordner and Jake Friend are being monitored by the Roosters after the concussion debate intensified following last week’s opening round.

One in five NRL players also admitted to hiding likely concussion from a team doctor or club official during the 2018 and 2019 seasons in an anonymous survey which was held at three clubs before the start of last year’s campaign.

North Queensland’s Kyle Feldt is facing a two-game ban with an early guilty plea for a grade two dangerous throw on Jack Bird in the Dragons’ upset win over the Cowboys.