A man who turned his back on signing for the Warriors cruelly ended their season as Toby Rudolf's late try sealed Cronulla's finals spot and set the NRL's top eight in stone.

Rudolf, who had verbally agreed to head across the Tasman to join the Warriors on a big money deal before re-signing with Cronulla, chose the perfect time to score his maiden NRL try as Cronulla won 22-14 win at Netstrata Jubilee Stadium on Sunday night. 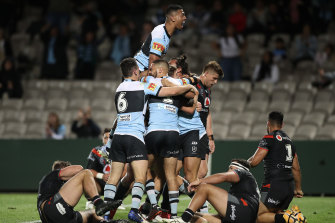 The Sharks celebrate Ronaldo Mulitalo’s second try as the Warriors realise their remarkable season is all but over.Credit:Getty

The Warriors were only six minutes away from prolonging the NRL finals race by another week before Rudolf's charge from close range confirmed the eight teams a fortnight before the end of the COVID-19 interrupted regular season.

Rudolf combined with the Warriors' former favourite son, Shaun Johnson, who laid on both of Cronulla's two first-half tries, to calm the nerves of their supporters who were facing a horror final fortnight against last year's grand finalists, the Roosters and Raiders.

Ronaldo Mulitalo bagged a double, including a late try which put the icing on the cake as the Sharks ensured they would make the finals for the second straight year under coach John Morris.

The result will be hugely deflating for the Warriors, which have been stranded in Australia for five months and didn't stop four players from returning home to their families in July, as they threatened to write one of the most remarkable chapters in the NRL era.

The Sharks will be bracing for an elimination final against either the Raiders or Rabbitohs, by which time the suspended Wade Graham and Chad Townsend will be back.

Chanel Harris-Tavita's 42-metre penalty goal with 17 minutes left edged the Warriors ahead for the first time in the match after they trailed 12-0 early.

But it was to no avail as Rudolf skittled Warriors defenders for his first four-pointer in his 18th NRL match.

Morris knows his side will be cannon fodder for their finals opponents unless they can quickly find another couple of gears, but will be heartened by the return from injury of Johnson, who was urged by Townsend to "carry the team on his shoulders" in the final three weeks of the regular season.

Instead, he carried them on his boot. 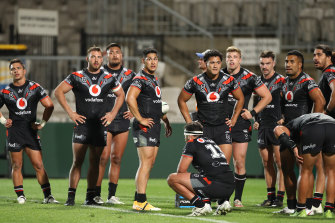 The Warriors were unable to prolong their own finals hopes by one more week despite fighting back to lead after being 12-0 down.Credit:Getty

The last time the Sharks and Warriors met a couple of months ago, Johnson taunted his old club with a display rarely seen since he hopped across the Tasman. Afterwards, he said he couldn't have made the sacrifices they were making to keep the NRL season going.

But he wasn't in a mood to ensure that sacrifice was going to be rewarded with the most miraculous finals berth in memory.

Of the Sharks' two first-half tries, Johnson set up both with his right boot kicking for wingers Sione Katoa and Mulitalo.

For the first he spotted fullback Roger Tuivasa-Sheck loitering in the defensive line and poked the ball through for acres of space in which Katoa could run onto. The second was a little more fortuitous when Josh Dugan had an air swing trying to ground Johnson's kick, allowing Mulitalo to pounce.

The Warriors desperately needed a reply before the break, and got one when Tuivasa-Sheck threatened to break the line before offloading for the outstanding Jack Murchie to score.

It was even more crucial given Adam Pompey's try 12 minutes into the second half, off the back of an audacious Peta Hiku flick, helped level the scores when Harris-Tavita nailed the sideline conversion.

The No.7's conversion gave them the lead, but it was one they couldn't defend with the players and officials to return to New Zealand on a chartered flight the day after their last match of the year against Manly.