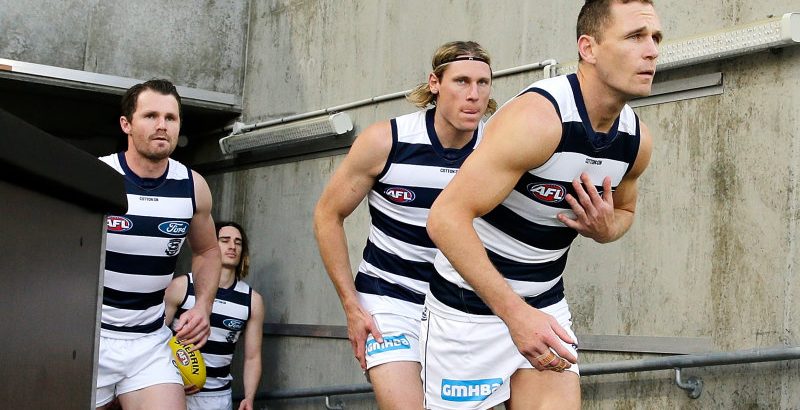 Geelong captain Joel Selwood says he would be “proud” to see a male AFL player come out as gay, declaring there is now a “safety blanket” in place in terms of club culture.

As the Cats launched their specially designed jumper for Friday night’s Pride Round AFLW clash with Collingwood at GMHBA Stadium, Selwood said any openly gay male player would be welcomed. 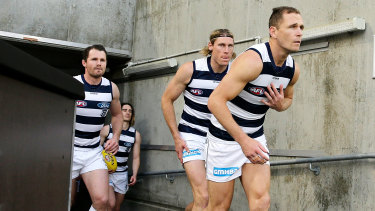 Joel Selwood leads the Cats out on to the ground at Optus Stadium for Geelong’s preliminary final clash with Melbourne.Credit:AFL Photos

“I think it would be widely accepted by all players,” he said.

“I know I usually don’t like talking in those terms on behalf of everyone, because I don’t think you should, but, especially from myself, I think it would be accepted, and I really encourage individuals to come out and have that safety blanket.

“Even from a guy that’s been around for a long time, I’d be really proud of that person if they did.”

The AFL is yet to have a male openly gay or bisexual player, but the AFLW has led the way in celebrating change.

Geelong AFLW skipper Meg McDonald, Selwood, and club chief executive Steve Hocking raised a rainbow flag on Monday ahead of this weekend’s round.

Selwood said the addition of an AFLW team had changed the culture of the Cats’ men’s program. 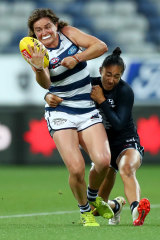 Meg McDonald is tackled by Darcy Vescio during their round two AFLW clash at GMHBA Stadium.Credit:Getty Images

“Bringing girls into our football club has helped in many different ways,” he said. “The behaviour, even the way we go about the locker rooms, the place is cleaner than ever, because of the way the boys respect the facilities because, when the girls come in, we have to have an understanding that, especially in these times, we have to have a higher duty of care,” he said.

“To think that such established clubs and communities are now really welcoming, not only welcoming but celebrating, everyone, I think it is really important to how the LGBTIQA+ community feels about the sport of AFL,” she said.

McDonald is a former housemate of Carlton star Darcy Vescio, who revealed they are non-binary. Vescio made the announcement three months after Tori Groves-Little, from the Gold Coast Suns, also came out as non-binary.

“Darce is one of the best things about AFLW and deserves all the celebration and thanks for what is happening in AFLW,” McDonald said.

“It’s incredible for them to share the news and be celebrated, and for the community to see that Darce and Tory for the Gold Coast are sharing who they are.”

What is seen as a more accepting AFL men’s culture comes after Adelaide United A-League player Josh Cavallo revealed late last year he was gay, becoming the first man in top-tier football worldwide to do so. While his decision was celebrated widely in the community, he has dealt with slurs. Football Australia has issued Melbourne Victory with a show cause notice after Cavallo said he received homophobic abuse from the club’s supporters during an A-League clash.