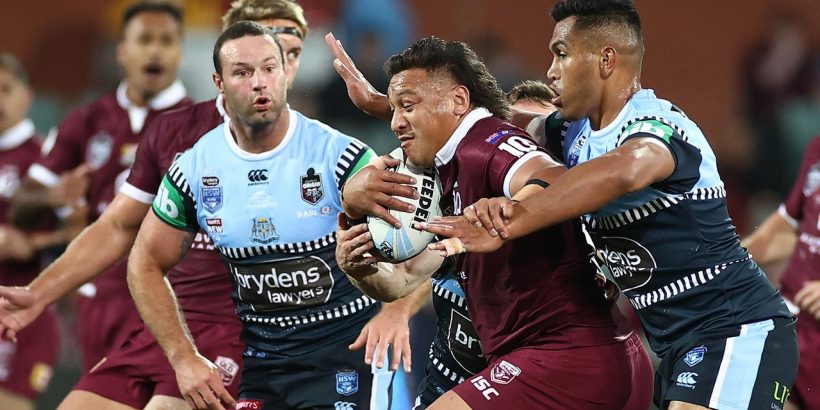 Canberra forward Josh Papalii won’t feature in Game I of this year’s State of Origin series after he accepted a three-match suspension on Monday.

The NRL judiciary cited Papalii for his hit on Bulldogs winger Tui Katoa in Canberra’s Magic Round victory.

The 29-year-old was one of three players sent off over the weekend amid the NRL’s crackdown on illegal head and neck contact.

Papalii accepted the early guilty plea for his grade three careless high tackle charge and will miss three games, ruling him out of this year’s Origin opener.

It’ll be Papalii’s first time missing an Origin match since Game III of the 2016 series.

With 2020 interchange prop Lindsay Collins sidelined for the remainder of the season with a knee injury, Queensland coach Paul Green may choose to promote Titans enforcer Moeaki Fotuaika to the starting side after he made his Origin debut from the bench in Game II last year.

Alternatively, Fotuaika’s former Titans teammate Jai Arrow could start in the front row, having played there for the Maroons on two occasions already.

Papalii was given marching orders in the second half. Josh Papalii send off Digital image by Scott Davis Ã¯Â¿Â½ NRL PhotosSource:Supplied

Had he chosen to contest the charge at the match review committee, Papalii could’ve found himself rubbed out of five games.

Instead, he’ll miss upcoming matches against the Storm and the Roosters in addition to the Origin clash.

Papalii’s teammates Josh Hodgson and Jack Wighton were both handed grade two dangerous contact charges over the weekend and will each miss one game after taking early guilty pleas.

Following his side’s tight win, Canberra coach Ricky Stuart warned the NRL that policing high contact too harshly could alter the fabric of the game significantly.

“We’re going to find a completely different game of rugby league from what we’ve been following for many years,” he said.

“It’s a tough, brutal contact sport and if we want to take that away, let me know, I’ll start recruiting different players.”

Stuart would have at least been pleased that his Raiders managed to snap their five-game losing streak in round ten, at the beleaguered Bulldogs’ expense. The slump was the equal worst of Ricky Stuart’s tenure as head coach in the nation’s capital.

The Raiders will hope to make it two victories in a row when they host Melbourne this weekend.