The man who helped build a modern Hawthorn dynasty says the Hawks are up to eight years away from premiership contention and has warned new coach Sam Mitchell his challenge will be to hold his nerve in the long-term.

As the Hawks take the first steps of a rebuild under Mitchell through this trade period, Chris Pelchen, a list specialist who played a key role in the club’s rise to the 2008 premiership, said the change of direction in finally shedding the top-up mantra of the post 2013-15 flag era had been overdue. 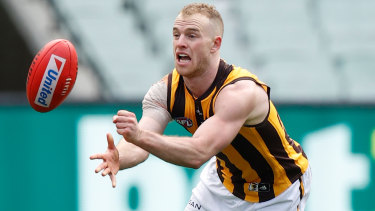 Tom Mitchell had an outstanding season for the Hawks.Credit:AFL Photos

Frontline midfielders Jaeger O’Meara and Tom Mitchell, the latter the reigning best and fairest winner and a former Brownlow medallist, small forward Chad Wingard, and three-time premiership star Jack Gunston are available to rival clubs in exchange for high draft selections. But, regardless of what happens before this year’s exchange period closes on Wednesday, Pelchen said Mitchell and his recruiting team needed to get their strategy right now, and then withstand the pressure that would come when his honeymoon period ends. 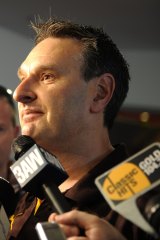 Chris Pelchen speaks to the media scrum in trade week in his Hawthorn days in 2009.Credit:Pat Scala

“There inevitably will come some expectation. People will allow Sam two or three years. After that, the expectation comes, and we have seen it with Carlton over the past decade, where you have had three coaches go through the system in this so-called build … but with each coach, they feel they need to take a slightly different tack.”

While president Jeff Kennett has said he feels the Hawks can return to premiership contention in two or three years, Pelchen said he believed the rebuild could take seven or eight.

“I think, unfortunately, Hawthorn should have taken this path three or four years ago and it wouldn’t have to be quite so drastic, but I think because it was delayed, and somewhat overdue, it will now be more aggressive than otherwise than it probably would have to be,” he said.

“Because of that, they are going to make list changes with players that otherwise would have been in their best 22 … they are going to have to move on some of those players just out of a need to get back into the draft because there is a dearth of young talent at Hawthorn.”

Pelchen’s comments reinforce those of former coach Alastair Clarkson in August that the club was a “long way” from unveiling more silverware.

The Hawks say they haven’t had specific discussions with rival clubs about trading their seasoned stars, and there are several issues complicating any attempt by them to do so, not the least being the tight salary caps of several potential suitors. However, the Hawks have room in their cap to help usher through any deal by potentially continuing to pay part of a departing player’s salary.

What they may also need to rely on are prospective buyers being in the premiership window, for instance, Port Adelaide, although the Power say they have not discussed any deal with the Hawks.

Pelchen, who also worked as a list chief with the Power and St Kilda, said he would not trade Gunston, the silky forward who is back in the gym after back surgery. The 2020 best and fairest winner managed only one match this season but Pelchen said he was still needed to help guide young forward Jacob Koschitzke.

“There is a dearth of young talent at Hawthorn.”

“I think while they have a Koschitzke up forward, I think it’s a big call for him to take on the mantle of key forward in the team at his young age,” Pelchen said. 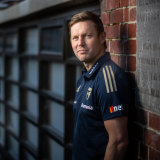 “I think, ultimately, he is another 12, 24 months away from not just having the physical maturity but the mental maturity to take on that sort of role. I would be loath to move on Jack Gunston for that reason.

“I would personally be looking more at their small forwards, ie a Wingard, or a midfielder, between O’Meara and Mitchell. I think one of those two and, potentially, Wingard if you are looking at multiple (deals). I think (Luke) Breust’s market rate has decreased because of age.”

Utility Tim O’Brien has joined the Western Bulldogs as a free agent, while ruckman Jon Ceglar has been linked in a move to Geelong.

AFL trades 2021: Stay across the moves, news and what it all means as our Real Footy newsletter goes daily for trade period. Sign up to get it here.