Bulldogs prop Luke Thompson will likely miss the start of next season after an alleged eye gouge on James Tamou in the Panthers' 42-0 win on Saturday afternoon.

The incident didn't derail the Panthers though as they produced their biggest win of the year, finishing the 20-round season with just one defeat and a 15th straight win. 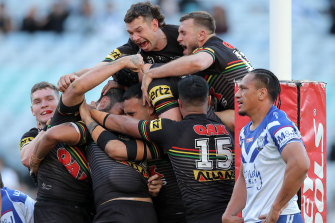 James Tamou crashes over the line for his first try of the season. Credit:Getty

Trent Barrett had an opportunity to eye up the players sticking around for next year, as the Panthers assistant prepares to take over as head coach of the Bulldogs for 2021.

The Panthers looked eager to give Barrett a benchmark to take to Belmore, once again demonstrating why they are the premiership favourites.

Brian To'o opened the scoring in the right corner in the seventh minute, before Capewell bagged a first-half double. Helped along by a try from Brent Naden, the Panthers entered half-time 20-0 up.

Josh Mansour started the Panther's second-half effort with a creative leap for the left corner which saw him almost take out a cameraman on the sidelines. Brent Naden scored his second for the afternoon before Matt Burton joined the party to secure his side their biggest win of the year.

In a sign it was not Thompson's day, the English import was denied a try in the final minutes before Tamou crashed over the line three minutes from time for his first of the season.

Ivan Cleary was beaming from ear-to-ear in response to Tamou's try and as the Panthers players lifted the JJ Giltinan Shield. And so he should be.