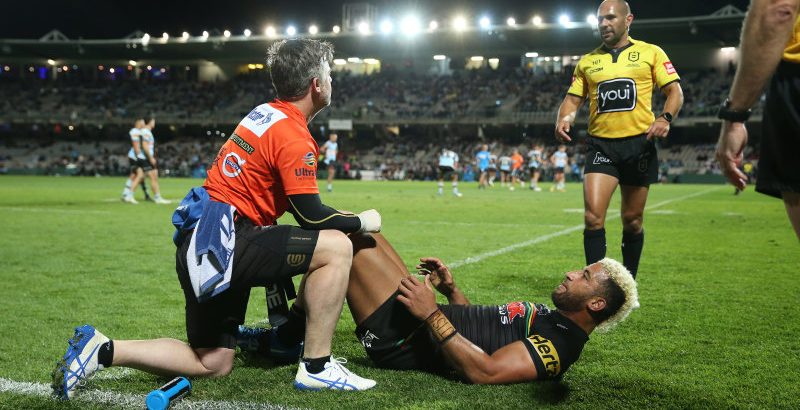 Penrith will be investigated by the NRL, and potentially fined, for controversially stopping play after star back-rower Viliame Kikau went down in back play last weekend.

Kikau was a notable omission from the Panthers’ line-up for Friday’s blockbuster clash against the Sydney Roosters because of the hamstring injury he suffered against Cronulla for which play was stopped. 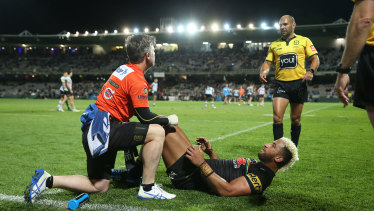 Viliame Kikau injured his hamstring against the Sharks, with the Penrith trainer calling for the game to be stopped.Credit:NRL Photos

Clubs risk being fined if trainers are seen to stop play for no other reasons but a “tactical advantage”.

NRL head of football Graham Annesley was guarded when asked about the Kikau incident at his weekly briefing.

“We’re currently in the process of looking into several incidents arising out of last weekend’s round of football, and once we’ve completed that process we’ll be in a position to make decisions about any incident involving potential breaches of our rules,” Annesley said.

“Until we’ve competed that process I can’t comment any further.”

While Kikau’s injury was serious enough to rule him out of the Roosters match, the NRL will need to feel satisfied it warranted stopping play. Cronulla led 18-6 at the time, botched their set and quickly watched Penrith race in two tries to draw level.

A Shaun Johnson field-goal helped the Sharks win 19-18, but the Kikau incident came at a crucial time in the match with Cronulla on top.

“I thought the rule was for serious injury that play could be stopped, and if it was deemed not serious, play would go on,” Hannay said after the game.

“I know it’s a difficult one for the people in charge out there, you’re dealing with people’s health, but it looked like it wasn’t a serious injury. We could have put the game away there if it was allowed flow. Thankfully we’re sitting here celebrating a win.”

Penrith maintained the Kikau injury was serious enough to keep him out of Friday’s game against a heavyweight opponent like the Roosters. They were also mindful by giving him a rest now, and with the bye that follows, he would be fit for the round-16 crunch game against Parramatta.

Queensland and NSW pair Kurt Capewell and Liam Martin will be the starting back-rowers for the Panthers against the Roosters, while they also welcome the return of fellow Origin stars Nathan Cleary, Jarome Luai, Isaah Yeo and Brian To’o. Martin and Blues 18th man Api Koroisau were the only two to back up against Cronulla.

The Panthers are on track for yet another sellout on Friday night while the Eels clash following Origin II is already sold out.