An inspired Canberra Raiders overcame the sending off and sin-binning of their two best players to end the club’s five-game losing streak against the Bulldogs on Saturday afternoon.

Canberra’s season was on life support when they were reduced to 11 men midway through the second half, but Ricky Stuart’s men produced a Magic Round miracle to run down the Bulldogs for a 20-18 win. 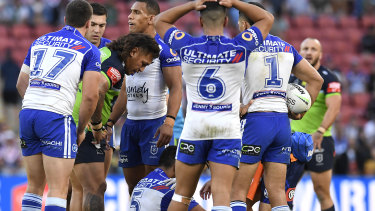 Josh Papalii checks on Tuipulotu Katoa after the dangerous tackle.Credit:Getty

The Raiders should have scored their second try of the half through Semi Valemei, however, a copybook tackle around the bootlaces from Canterbury fullback Dallin Watene-Zelezniak denied the Canberra winger.

The Bulldogs went into the second half confident of a come-from-behind win, especially considering the Raiders’ second-half capitulations in recent weeks. 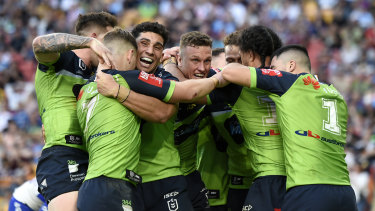 The Raiders celebrate the winning try to Sebastian Kris at Suncorp Stadium.Credit:Getty

It looked as though the Raiders would stay true to form when Nick Cotric burrowed his way over to score against his old club.

Wighton then found himself in the bin and the Bulldogs wasted no time capitalising on the extra man as Brandon Wakeham put Nick Meaney through a gap to take a 12-8 lead with 21 minutes remaining.

When Papalii was sent off, the Bulldogs were in the box seat to nab their second win of the year, but two tries in three minutes to Curtis Scott and Sebastian Kris allowed the Raiders to reignite the club’s finals ambition. Watene-Zelezniak crossed late for Canterbury but it was to no avail.