After a quick 25-minute drive out of Nadi, the mini-bus carrying the Eels hung a sharp right and they were quickly greeted by Sivo's cousin, Atu. Atu was impossible to miss because of the giant Eels flags hanging outside each window of his tiny car. 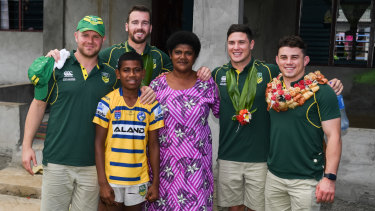 A further 10 minutes up the road and the players arrived at Momi, a village of 130 homes and 400 people. Every single one of them are proud of their rugby league hero Sivo.

Sivo, who posted 22 tries in a fantastic debut season on the left wing, was on the Gold Coast holidaying and mulling over the latest Eels contract. It includes an upgrade for next year and an extension for the 2021 season.

Back home on the island his teammates were being given a rockstar welcome. Moses was immediately swamped by the young locals, many who had cut short their morning at school.

So was Gutherson. Sivo's mother, Mere, who had tears in her eyes, revealed the "King" was her favourite player. 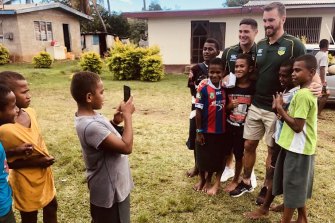 Mitchell Moses and Clint Gutherson pose up with children from Momi.Credit:Christian Nicolussi

"Because most of the time he gives Maika the ball to score," Mere said. "I'm really proud of Maika playing in the NRL. I hope he stays in rugby league – and especially playing with Parramatta."

The players were whisked away into Sivo's modest home where the players removed their shoes before several elders showed their appreciation with some locally-brewed kava.

An NRL official quickly got on the phone to discreetly ask if the kava would violate any rules relating to prohibited substances for the players, just two days out from their clash against the Bati.

"Our traditional welcoming involves kava. This kava will make you stronger when playing," Atu said with a smile.

Nathan Brown samples the local brew as part of an official welcoming into Maika Sivo’s home in Momi.Credit:Christian Nicolussi

Moses quipped: "Will it make me look like Maika? Then I'll have 10 cups."

The halfback then stood and showed his appreciation to Sivo's family and community by handing over several training shirts.

The front page of the local Fijian tabloid featured former Eels and rugby ace Semi Radradra and his battle with Wales in the Rugby World Cup. Fiji still loves the 15-man code.

But the interest Sivo has generated in rugby league cannot be underestimated.

Suspended for a shoulder charge on Melbourne's Ryan Papenhuyzen in the Eels' semi-final against the Storm, Sivo will be free to play in next weekend's World Cup 9s for Fiji but miss their first Test against Samoa at Eden Park.

Fijian coach Brandon Costin, who will use Friday's game against Mal Meninga's PM's XIII in Suva to showcase the local talent rather than trot out NRL stars, said of Sivo: "Every young kid in Fiji wants to play for Parramatta. What he has done is just a fairytale. You could almost make a movie out of it.

"It’s what every young kid in Fiji is buying into. They want to follow that same dream. 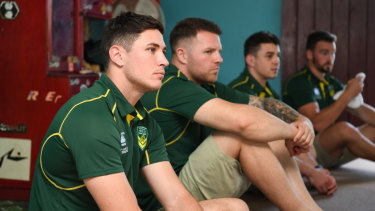 "That is the making of him as a man and Maika has been able to do that. He is a role model now for every young boy in Fiji who not only wants to play rugby league but also wants to serve their family.

"For our locals boys, they grew up in a village playing rugby league with a Coke bottle. Their dream has always been to play for Bati."

Gutherson said of seeing Sivo's home and his importance to the blue and golds: "It was special to go out there and you don't realise how big footy is until you see it like that and they knew everything about us.

"It's great he can help out with his home country now. It's exciting.

"He didn't have a pre-season under his belt this year, so with a full pre-season he'll only get better. From round one to the time we got knocked out he was 100 times better."

When the Herald pointed out why he was Sivo's mother's favourite player, Gutherson said: "The boys joke I can only pass the one way. But if he's there I just have to throw it to him and he scores a try. If I'm someone's favourite it's a plus."

*Christian Nicolussi was a guest of the NRL in Fiji with the Prime Minister's XIII.