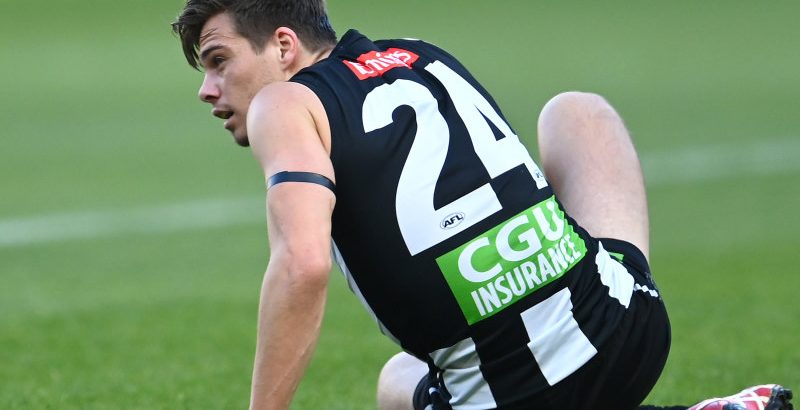 Collingwood has lost up to four players from Sunday’s loss to rivals Carlton and will consider at least one, if not two, debutants for Friday night’s clash with Port Adelaide.

The Magpies will be without Callum Brown (shoulder) and Josh Thomas (concussion) from the 29-point loss to the Blues, while experienced pair Chris Mayne (ankle/foot) and Will Hoskin-Elliott (hamstring tightness) are doubtful given the five-day short turnaround to play in Adelaide. 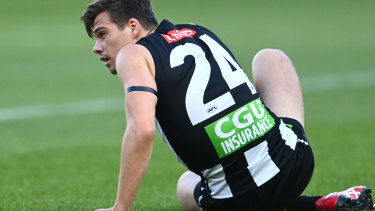 The loss of up to four players to injury means the Magpies will look at handing a debut to one or both of small forward Jack Ginnivan and Irish tall Anton Tohill, while Brayden Sier, who has excelled in the VFL as an insider midfielder lately, is expected to be promoted.

Ginnivan, a rookie pick from last year’s draft, has performed well as a goalkicking small forward in recent weeks. Tohill, recruited alongside fellow Irishman Mark Keane, has been plying his trade as a tall defender and showing signs of improvement.

Star defender Jeremy Howe is making good progress and close to resuming, but cannot be considered for selection for this week.

Collingwood, who will have to fly up and back on Friday – taking a late charter flight back – to comply with COVID-19 rules set by the South Australian government, are keen to give more youngsters a taste of senior football in the remaining five games of 2021 and fast-track their list regeneration after a disappointing year.

Draftee Reef McInnes, who recently returned to the VFL after missing much of the season, is among those they hope to promote to play seniors in the remains of this season.

They will meet a Port Adelaide side that expects to be strengthened by the potential inclusions of star youngster Zak Butters (knee) and Xavier Duursma, while gifted small forward Connor Rozee is also some chance to resume against the Magpies, if perhaps less likely an inclusion than Butters and Duursma.

Butters had appeared to suffer a serious knee injury in the Power’s 31-point defeat by Melbourne. But he has recovered well from what was a medial ligament sprain and has been pencilled in as a probable inclusion for the Friday night clash, which, with Duursma back, would give Port a notably stronger side on paper than the one they fielded against the Demons or St Kilda.

Duursma has played the past two games in the SANFL and is viewed by the club as ready to play seniors again.