Right place at the right time with opportunistic early try to level score but captain's night ended by the knee of Papalii inside 20 minutes. 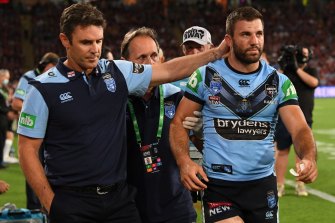 Made fumble that Munster seized on before break to kick for a try but looked dangerous when finally seeing some ball late, including a try.

Seemed more comfortable than in first two games with switch from centre to regular fullback position. Did nothing wrong but Tedesco terribly missed.

Rarely sighted with ball until final moments and guilty of loose pass in last 20 minutes. Terrific player but selection at centre didn't work this year.

Shot off wing as Munster set up Holmes for first try but otherwise did well in defence, assisting Yeo under mountain of pressure and gave Blues late sniff.

Quieter than in impressive return to run-on side in Sydney as Maroons gave little ground when Blues shifted to fringes. Knocked out in last five minutes. 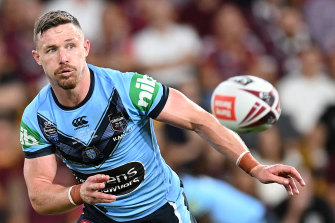 Bolted out of the blocks with dangerous running out of dummy half but then spent most of evening tackling, which he did well.

Shelved the biff for the barge and produced lovely pick-up from Friend grubber when Blues under pump early. Couldn't bend line as in other games.

Tried hard but down on the performances of past years, as evidenced when stood up by Origin tyro Grant. Maybe final Origin series?

Heavily involved in attack and defence as usual, racking up total of 54 tackles, although possibly used as first-receiver distributor too often.

Came on, tackled, and then tackled some more with half-hour cameo off the bench in midst of tide of maroon on their own line.

Didn't have same punch as in Sydney and gave away silly penalty in play-the-ball in second half. Probably not right man to get ball at end.

Only used briefly by Brad Fittler, leaving the field after contribution of only eight minutes in the second half, hence the low score.

Jettisoned in at right centre when Tedesco exited with no backs on the bench. Vulnerable in defence with lack of speed and Gagai opposite. 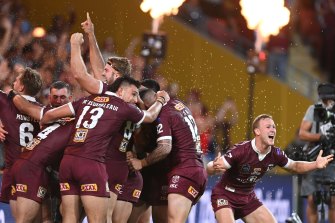 The Maroons celebrate after the siren.Credit:Getty

This is his spot in representative football. Scored a classic winger’s try after shifting from fullback. Could have finished with a hat-trick with better finishing.

Beggars belief that the Blues didn’t give him a more rigorous examination defensively in his first Origin game. Held his nerve.

Switched to the left side and was too good for Isaah Yeo, who was forced into the centres in a back-line reshuffle following James Tedesco’s departure. 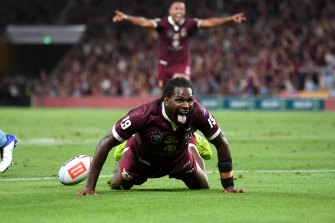 Gave Queensland the slick service they required early before taking a breather. Shared the field with super-sub Harry Grant later on.

Vowed to step up after an undisciplined effort in game two and delivered. Got through plenty of early defence, including (accidentally) taking out James Tedesco.

Another solid contribution. The Australian forward made plenty of metres and tackles as part of a dominant Maroons pack.

Couldn’t quite reproduce his game one heroics after shifting from the centres to the back row. Still made a valuable contribution.

His opening stint was the best of any forward on the field. Punched holes in the Blues defence instead of punching on with Payne Haas.

Find of the year. Immediately upped the tempo when he came on. Scored the winning try. Will be the Maroons No.9 for the next decade.

Forced the ball loose from Cody Walker, a massive play to change momentum just as the Blues were getting on top. Whacks in defence.

Poor form when he picked up and sledged a concussed James Tedesco. Effective when focusing on football, part of a dominant bench.