They put up a brave fight, but Sydney were inevitably overwhelmed on Saturday as superstars Charlie Dixon and Robbie Gray helped restore Port Adelaide's position on top of the AFL ladder.

Briefly knocked off the perch they have occupied all season long after Geelong’s victory over the Western Bulldogs on Friday night, the Power put a scratchy fortnight behind them with a tidy 26-point win over the Swans. 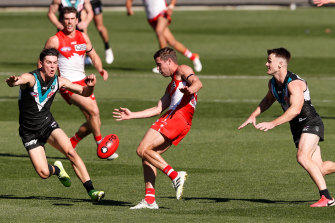 Jake Lloyd was among Sydney’s standouts but it wasn’t to be for a Swans side always likely to be up against it.Credit:Getty

Dixon was always going to be a tricky customer for Sydney in the absence of co-captain and defensive marvel Dane Rampe – one of 10 players who have been ruled out for the rest of the season – and so it proved.

The Power's bearded behemoth kicked three first-half majors and was too strong for Lewis Melican and Aliir Aliir, although the latter was unlucky to have been pinged for a questionable free kick which Dixon converted in the second term.

Held scoreless in that quarter, the Swans successfully turned the tide in the third, holding Port Adelaide goalless while completely stifling their ball movement.

It would have killed coach John Longmire that they only came away from that quarter with two goals to show for their efforts – the latter coming through Nick Blakey in the dying seconds to reduce the margin to 18 points.

But Dixon landed a telling emotional blow for the Power early in the final term, throwing off a chasing Melican with some nimble body work that belied his 105kg frame, before sealing his fourth goal with an across-the-body kick.

Adelaide Oval might have been half-full but it was an effort that nearly brought the house down. And while it effectively nixed Sydney's chances of an unlikely upset, much to their credit, they kept coming at the Power until the final siren.

Had Rampe, Lance Franklin, Isaac Heeney and George Hewett been on deck, it might have been a different story for the Swans. For the kids filling the gaps in their absence, this was another vital learning experience.