While Carlton is the club that has been most strongly linked to Merrett – an interest that was evident late last season before Merrett opted not to request a trade – industry sources have confirmed that the Power have registered an interest in Merrett, a restricted free agent this year. 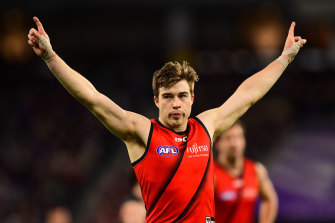 More than one club has shown an interest in Zach Merrett.Credit:Getty Images

Melbourne are another club to have shown strong interest in Merrett, who would add run and ball use to a formidable ball-winning midfield.

Merrett also was on the radar of Collingwood last year, but the Magpies, who offloaded Adam Treloar and Jaidyn Stephenson during the trade period due to their salary cap squeeze, would have to find salary cap room to make a serious bid.

Port Adelaide, despite being one of the flag favourites this year, expect to have salary cap space heading into next year due to the unusual nature of their playing list, which has outstanding veterans such as Travis Boak and Robbie Gray, plus exceptional players under 22 leaded by Zak Butters, Connor Rozee and Xavier Duursma.

The Power have Gray, Steven Motlop, Tom Rockliff and Hamish Harlett all coming out of contract this year and all on substantial contracts – a scenario that will allow Port to make room for an incoming free agent or recruit from another club, if they can attract one.

Essendon’s major rivals are among several clubs with strong interest in Merrett, who has put off contract negotiations to let the season settle before making a decision on his future. The contract he signs this year is expected to be the biggest and most important of his career and he is assured of being highly paid, at Essendon or elsewhere.

Essendon are confident that, provided the club continues to show a regeneration and improved environment – and prospect of future success – Merrett will choose to stay.

But club sources said the Bombers understood and respected that Merrett wanted to take his time in making a decision on his future.

Merrett, arguably Essendon’s best player and close to their best performer in four rounds this year, has been promoted back into the player leadership group after the players voted him out for the 2020 season.

He also received feedback on how to improve his leadership during 2020, when the Dons acknowledged privately that their environment needed improvement, having had some issues when ensconced in the hub in Queensland.