Port Adelaide shrugged off an indifferent start, persistent, driving rain and a season of being underestimated from outside their walls, putting Essendon away in masterful fashion and clinching a coveted home qualifying final.

If ever a team has resided under the radar while topping the ladder from the opening round to the penultimate one, it has been the Power in 2020.

With more plaudits and attention consistently paid to Richmond's blue-riband finals reputation, Geelong's firepower and Brisbane's combination of excitement and confirmed home-ground advantage, Port have, with a minimum of fuss, just gone about their business. 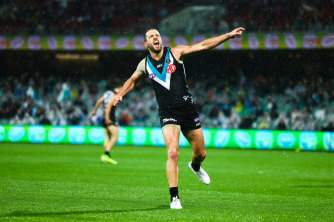 The Bombers, notoriously slow starters, injury plagued and with no recent form to hang their hats on, started with purpose and belligerence at a greasy Adelaide Oval. 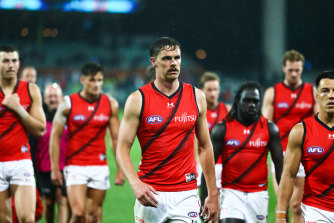 Joe Daniher leads the Bombers off the field after their loss to the Power. Credit:Getty Images

The Power dusted themselves off after the break – and never looked back – producing a champagne second term of footy which, notwithstanding the undermanned and increasingly dispirited opposition, would have had the Tigers, Cats and Lions arching their backs, standing up and taking genuine notice.

Port strangled the life out of Essendon at the stoppages – and proved even more unstoppable away from the contest. They had overwhelming advantages in disposals (104-53), uncontested possessions (59-21) and handball receives (38-11), Lycett stepping it up against Draper, best-afield Tom Rockliff as prolific as ever and Travis Boak asserting himself after a quiet start.

Along the way, the Power had brushes of good fortune with their finishing. 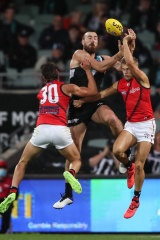 Kyle Langford was pinged for an unlucky free kick in defence when he appeared to bump-ball a kick out on the full, resulting in Sam Powell-Pepper snapping the free kick truly. And Brad Ebert's chipped pass intended for Lycett, from 60m on the fly, was overcooked but bounced through for a goal. Yet, Port thoroughly deserved their 28-point half-time advantage.

The rain was unrelenting in the third term and Port had to wait until the last 19 seconds – when Rockliff snapped hurriedly – to finally goal, extending their buffer to 34 points. It was one-way traffic in the fourth, despite Essendon's false bravado.

Jake Stringer, who continued his indifferent season by missing two shots for goal against Port and generally struggling to get a kick otherwise, threw his weight around as the margin approached 50 points.

But Stringer's bluster didn't trouble the Power. They have bigger things on their mind.

Lowering the eyes
When 195cm, 86kg Brandon Zerk-Thatcher took his position on the last line of defence alongside 200cm, 107kg Charlie Dixon to start proceedings, Port's players took an immediate liking to the match-up.

But the Power became so Charlie-conscious with their one-dimensional entries early, it appeared they were trying to help Dixon fill his boots in his 150th game and creep up on John Coleman Medal leader Tom Hawkins.

The big spearhead had less influence as the game wore on later due to a combination of the opening of the heavens and a smarter approach from Port's playmakers who became less predictable, one of many factors in Port's commanding fightback.