Carlton coach David Teague has admitted he handled a mid-week press conference poorly when he bristled at questions about a story that revealed co-captain Patrick Cripps had played through injured early in the season with a fractured back.

The Age reported last week that Cripps had needed injections to play early in the season through a fractured back, an injury he suffered in the pre-season. 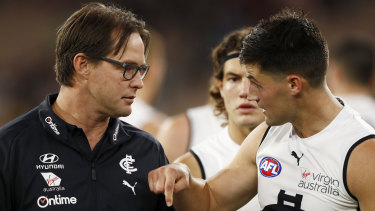 Blues coach David Teague speaks with Nic Newman during their side’s clash with the Demons.Credit:Getty Images

Asked about the report later that day, Teague seemed to reject it and said Cripps was “fine” and claimed he did not know the extent of the injury his star had been suffering.

“He’s fine,” Teague said on Thursday.
“He’s doing all of the training. He’ll complete everything in training today. He doesn’t have a fractured back. Not at all.

“Everything has healed now and he’s fine. He had a sore back, I’m not sure what the actual findings were. But that was reported, he had a sore back earlier in the year. I think he’s been completing full training since round two or three.

“It’s not an issue now. You can talk about it if you want, but it’s in the past.

“He may have [received injections earlier in the year], but I’m not sure. I don’t know what the medical side of things were. I know he had a sore back and we managed it from a training point of view, but he’s fine now.”

Asked about Cripps’ performance in the Blues’ 26-point loss to Melbourne on Sunday, Teague accepted he had not dealt with the situation well.

“I assessed his game [Cripps] better than the way I handled the media conference the other day,” Teague said after Sunday’s game.

“That was pretty average by me.

“Today he was tough again, he competed and he won it, and when he didn’t he pressured well.

“I thought the injury was in the past. It hampered him in rounds two and three so when it got brought up I was probably a bit frustrated and I wasn’t honest and direct as I could have been.

“At the end of the day the message I wanted to get across is he is fine now and I probably could have been clearer with the messaging around that. 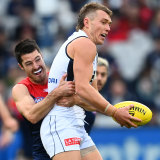 “I thought it was one of my worst press conferences.”

He said he knew “the full extent of the injury”.

“There’s times you want to protect your player,” Teague continued on Sunday. “This one, the frustration probably came off it was in the past and we were dragging up old news because he didn’t probably have his best day.

“Our medical staff I have absolute trust in, I think they do a very good job but do they feed that information back to me? Absolutely. I am clear of what is going on.

“We will always put the best interest of our players at heart.”

The coach said the Blues did not adjust to the game well enough to stay with the Demons, and said that it was one of his side’s more disappointing performances for the year.

“When they went forward and got it to ground they beat us in the crumbs there,” he said.

“We tried a few things … it was more our ball use around the ground, the ones from stoppages.”

He said David Cuningham’s knee injury looked “serious”. It happened seconds into the game and he had to be substituted out. Cuningham was to play on Jake Lever, an influential figure in the match.

Harry McKay kicked three goals despite looking quite uncomfortable with a shoulder injury that kept him off the field for 10 minutes in the first term.

“He has had that for a couple of weeks so hopefully it will continue to get better, he said it felt better going into the game than last game,” Teague said.