It’s taken three years and more than half a dozen attempts, but Parramatta Leagues Club members have finally agreed to a new constitution that ensures the Eels are protected from privatisation and will continue to receive leagues club funding.

The latest attempt to introduce the governance changes were passed at the ballot box at Bankwest Stadium on Tuesday night. A total of 76 per cent of the votes were in favour – just above the 75 per cent threshold required to amend the constitution. 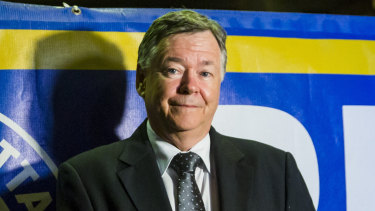 Every attempt to introduce constitutional changes has been stymied by a bloc of voters just large enough to prevent the requisite 75 per cent threshold from being reached. On this occasion, however, Eels identities including Brad Arthur, Peter Sterling, Clint Gutherson and Mitchell Moses publicly backed the ‘yes’ vote.

The result has been hailed as an opportunity to guarantee funding to the Eels and to introduce a triennial election system that minimises the chances of factions being swept into power.

Long-time former Parramatta Eels CEO Denis Fitzgerald spoke at the meeting in favour of the proposal. He said the football club board appointed by Donnelly – the Eels remain in premiership contention – was proof he could select competent directors.

"We have to vote ‘yes’ so we can get on with it and Max can retire," Fitzgerald said, before adding: "I am sure we will beat the Broncos on Sunday."

However, the first of the two motions fell five agonising votes short of allowing the complete reforms, that would have allowed members to install their own directors from 2021.

The vote took place just a day after the Herald revealed that the Leagues Club had been cleared of salary cap rorting after a year-long investigation by Liquor & Gaming NSW. The regulator investigated allegations that Eels players were given subsidised rent on properties owned by the league club. However, there was no evidence of any breaches of the NRL’s salary cap or the Registered Clubs Act. PLC chief executive Bevan Paul was also cleared of any impropriety following a raft of allegations, that were believed to have emanated from a disgruntled former employee.

The Eels have been reliant on grants from the leagues club to help fund their football operations, although they are hoping to get to a point where they are self sufficient.