"We can't go back into our shell."

That was the message from St Kilda coach Brett Ratten to his troops at three-quarter time to help catapult the Saints to a thumping 53-point win over Sydney at the Gabba on Saturday.

The Swans closed to within 14 points of the Saints late in the third term when they controlled possession and field position, and loomed ominously on a St Kilda side that led by 30 points just after half-time. 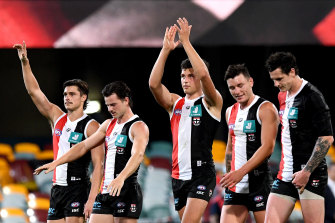 The Saints celebrate after firming their position in the top four. Credit:Getty Images

But the ghosts of capitulations to North Melbourne and Fremantle earlier in the season were put to bed by a six-goal blitz in the fourth quarter to help St Kilda remain in the top four with their sixth win of 2020.

"The way we finished the game was really pleasing. The third quarters are a little bit of a worry. We've had a few now, it's not the first time.

"It's part of our game we've got to clear up.

"That third quarter our ball use … we played a little bit safe and didn't play our way, but the contested ball was poor. Sydney lifted up the intensity around the footy and we got beaten in that space.

"That was the real message. Let's roll our sleeves up and get back in there."

Ratten praised the bright spark that Nick Hind gave the Saints with his three goals and was also impressed with the shutdown job from Ben Paton on Tom Papley. 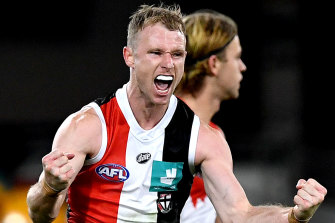 "The Hind performance was a real standout and one for him to really get his career going. He grabbed that game by the scruff of the neck and had a big impact," he said.

"Ben's really grown as a player. He's around that 30 games now and he's going to get some challenges. He's going to play on some good players depending on the match-up, but this was one that was suited for him.

"It's good for his confidence. The wins that you have as a player throughout your career help you grow."

Ratten said the Saints were building nicely and happy to embrace the hurdles that come with the compacted fixture and being based in Noosa.

"The next phase of short turnarounds will challenge teams. Our approach will try and stay the same," he said. 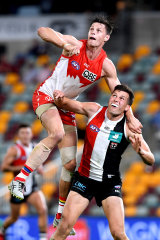 Callum Sinclair gets above Rowan Marshall as they challenge for the ball.Credit:Getty Images

"We won tonight [but] we've got a few things to work on our game. It's not that we're playing perfect footy."

Sydney senior coach John Longmire said his side "got smacked" at centre bounce clearances in the fourth quarter and their defence did not hold up under the onslaught.

He said the Swans needed to get more reward for effort in the third term when they were virtually camped inside their attacking half of the ground.

But the youth of the team was no excuse for the final quarter collapse.

"I think that's the reality of playing younger players, but there's also got to be a standard that we keep driving," he said.

"We just don't sit there and say, 'OK, we've got a young team and we've got some blokes learning the game'.

"We've got to say, 'This is acceptable, and here's the areas we have to improve'. We've got to keep driving that standard and making sure no matter what we do, we get better at it."