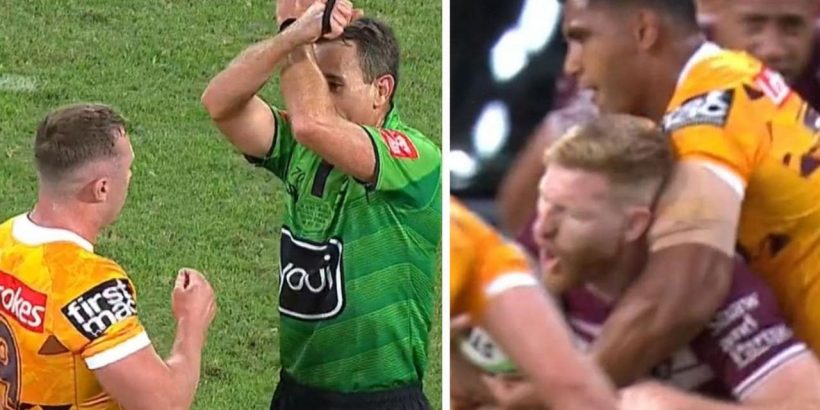 Rugby league fans have been left scratching their heads over the NRL’s crackdown on tackles after the referee went back five plays to award a penalty in the match between the Broncos and Sea Eagles.

The referees showed they wouldn’t be scared of sin binning players with four given a 10 minute break in the first game of the weekend between the Tigers and Knights.

But none were for foul play, rather ruck infringements close to the line.

While there had been some high tackles, none landed players in the bin despite the reported crackdown.

“It has been passed down to the game’s officials, that the commission is unhappy with the way things unfolded last week, in particular involving the Parramatta v Roosters game,” Andrew Voss told his SEN audience this morning.

“To the coaches and players – this message – and indeed to the media and commentators, including myself, to in turn inform you the fans to be prepared for what’s coming next.

“There will be a tougher approach to foul play, beginning game one tonight.”

But in the Broncos-Sea Eagles match, with Manly leading 6-0, fans were left scratching their heads as referee Gerard Sutton went back five plays to award a penalty.

The Broncos finished a set of six with a short kick but was messily tidied up by the Sea Eagles’ Brad Parker.

He was hit by Tevita Pangai Jr with no one appearing to bat an eyelid.

The high shot that was called back five plays later.Source:FOX SPORTS

That was until the final play of the set when Daly Cherry-Evans put up a bomb and was awarded a penalty the second it was defused.

The commentators were baffled as Sutton began to run down the other end of the field.

He then put Pangai Jr on report for the first tackle hit on Parker.

“That is a long advantage,” Dan Ginnane said in commentary.

Michael Ennis said: “That’s fair enough. It’s a long advantage you’re right, it should have been done there and then. But it is high and it warrants a penalty.”

Manly then went up the other end, got another set of six and then scored off their second try.

But social media was baffled about the decision.

That is the most bs refs’ decision I have ever seen. 😮 #NRLManlyBroncos

I'm all for cracking down on high shots but taking the game back six tackles is ridiculous for an incident like that. Just have him placed on report. #NRL#NRLMagicRound#NRLManlyBroncos

The Courier Mail’s Travis Meyn was fuming over the calls with four Broncos put on report in what could be a costly first half.

“I don’t even know what to say about what is happening in the @NRL right now with this high contact crackdown. It is so wrong. The referees have been put in such a terrible position too. This is not the answer,” he began.

“The players ARE NOT going out there to take each other’s heads off. They have been coached for a long time now to tackle around the chest to prevent offloads + slow the ruck. The NRL’s reluctance to stop wrestling over 10+ years has caused this approach.

“To give them a day’s notice and expect a complete overhaul of the way the game is played is unrealistic. Accidents happen in such a fast-paced and physical game. Those that commit serious foul play should be heavily sanctioned with fines+suspensions.

“The game has the right attitude in wanting to improve player safety. Head injuries are one of the biggest issues it will face in the coming years. However there are no winners with this current approach. There is far too much pressure on the players + match officials.”

The sides went to the halftime break at 20-6 with the Broncos turning the momentum late in the half.