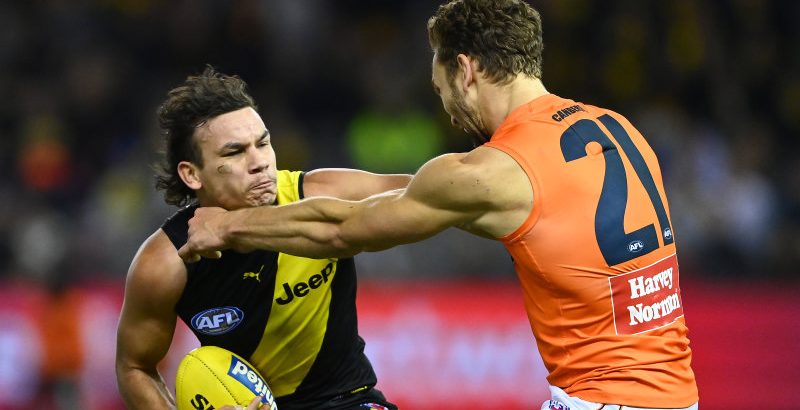 Richmond coach Damien Hardwick says he was worried about Daniel Rioli’s welfare leading into the game in which the small forward kicked the winning goal against Greater Western Sydney.

The three-time premiership coach also took aim at the AFL for scheduling the Tigers away from their spiritual home at the MCG after only 18,798 fans watched the club score a thrilling four-point win at Marvel Stadium, a venue Hardwick intimated had no soul.

It had been an eventful week for the Tigers, who made headlines after Rioli and Shai Bolton were involved in an altercation at a nightclub. Bolton broke his wrist and Rioli received a black eye defending the latter’s girlfriend from what the club said was inappropriate conduct toward her.

Rioli reassured Hardwick over the phone on Friday night that he was ready to play – then showed it with his goal to put the Tigers in front in the dying minutes of Saturday night’s game. It was one of a number of key plays Rioli was involved in during a frantic final quarter.

“It was great. I thought he got his hands on a couple of important balls. His last quarter was quite special, I thought,” Hardwick said.

“It was great for him to finish with that goal that put us in front. We had a tough week, there’s no doubt.

“We just want to get out there and play, I was a little bit worried about him last night. Back and forward a couple of times to see how he was feeling from a stress point of view but he was adamant he wanted to play and played an important part in getting us over the line.

“The increased stress can lead to injury but he was pretty cool, calm and collected on the phone.

“He’s just one of those guys who loves playing the game. He just wanted to play. Good on him, Sometimes it’s good for him to tell me when he’s playing and when he’s not. It was a real positive for us.”

Hardwick said Rioli, who lived with the coach’s family when he started his league career, was an integral figure in building the club’s culture.

“Sometimes you forget what people brought to our club. The culture, the sense of connection, the sense of family, it all started around his coming,” Hardwick said.

“I’m not saying he’s the sole reason that it happened. I know from my own humble beginnings when he moved in with me and Danielle the fact it brought our family closer together.”

Hardwick was critical of the AFL for scheduling the Tigers’ home game at Marvel Stadium. The crowd was the Tigers’ lowest for a home game in Melbourne since round 12, 2004.

“The truth of the matter is you can play Richmond games here but they don’t come,” Hardwick said.

“If you want big crowds play our home games at the G. Pretty simple solution for mine.

“I hate coming here. I probably shouldn’ say that.”

Asked why, Hardwick replied: “The MCG has got soul, it’s got Richmond people there. Our people don’t come here, plain and simple. I’d love them to come but the fact of the matter is I can’t drive them all here.”

The result cost the Giants a spot in the eight at the end of the round but coach Leon Cameron said his injury-hit team was likely to be bolstered next week by the return of All Australian backman Nick Haynes.

“I hope so, we’re scratching the barrel at the moment,” Cameron said.