Richmond coach Damien Hardwick concedes the Tigers’ brand has been tarnished by Callum Coleman-Jones and Sydney Stack’s late-night antics, saying the club must rebuild its reputation. 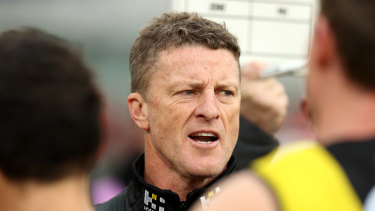 Hardwick played a straight bat when asked about the payment of the fine.

“The reality is it’s something that I’ll steer clear of at this stage and let their managers and Brendon work through it,” he said.

But Hardwick said the Tigers would continue to support the two players involved.

“We’re incredibly disappointed with the action, there’s no doubt about that, but also concerned about the individual. These two players are like family to us, so we’ll always look after them, but they’ve also got to understand the repercussions of their actions. Accountability and responsibility is a big one in today’s society.”

On a football front, Hardwick confirmed that Dylan Grimes (hamstring) and Kane Lambert (hip) would both return in Friday night’s blockbuster against Geelong. David Astbury (knee) is instead likely to play in a practice match.