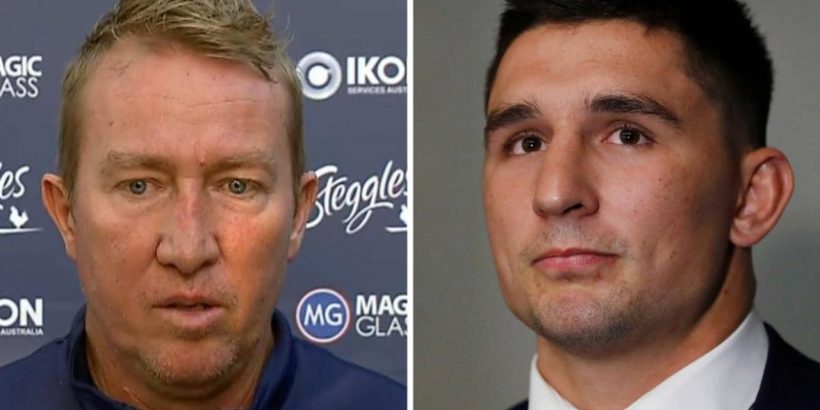 Roosters coach Trent Robinson has launched a stinging spray at suspended forward Victor Radley after he was kicked off a flight on the Gold Coast.

The 23-year-old is under investigation from the NRL Integrity Unit after he was reportedly kicked off a flight returning from the Roosters’ clash with the Titans in Round 14.

Radley went to the Gold Coast last Saturday to watch his best mate Ben Thomas make his NRL debut for the Roosters.

He did not feature in the game as he is currently serving a suspension due to an on-field incident, but Robinson was livid with his actions.

Victor Radley was reportedly kicked off a flight returning from the Gold Coast. (Photo by Matt King/Getty Images)Source:Getty Images

“It is really frustrating,” Robinson said.

“We don’t want that in general public let alone someone that wears the colours every week.

“It is disappointing and it shouldn’t happen. It is not what we want form our players so just don’t do it.

“Act like a man in public and behave yourself, it is pretty simple.

“It is not that difficult. Hand up who has got on a flight before? Like how hard is it to get on a flight and get home?

“He’s a good man who wants to be one of the boys. He has to assume that responsibility of being an NRL footballer and a leader at a club and we don’t want to act that way.

“People look up to Radley. He’s a really good man. He has good principles and he wants to be a lad sometimes.

This is not the first time the Integrity Unit has looked into an incident involving Radley.

In March he was hit with a two-game suspension and $20,000 fine — with half of that suspended — following an altercation at a party in Byron Bay on December 30 last year.