When he was diagnosed with cancer, Jarryd Roughead went on a long drive with Alastair Clarkson.

The coach wanted to get the player out of the city. Cocooned in the car, they drove down to Cape Schanck, where Clarko was interested in buying a beach getaway place for the family. They went past a house he was interested in on this road. It was at No.2. 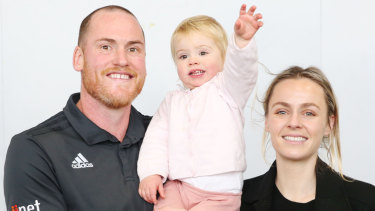 They had a good look, then kept driving on and talking about life and mortality and football. Roughead had been diagnosed with a melanoma on his lip. No one quite knew how to deal with it, though Roughead appeared to have the most positive and pragmatic approach of everyone.

Clarkson had the death of Jimmy Stynes still rattling angrily in his head, and he could not shake the uneasy pessimism that created. Not that he gave voice to it, but he perhaps had a keener sense at the time, even than Roughead, of the gravity of the situation.

They kept driving, put the car on the ferry across the heads and drove around the Bellarine Peninsula. They stopped in and visited Clarko's parents. Roughead is a garrulous country boy from Leongatha and he finds conversation easy with grounded people. They drove on and did a full loop of the bay in a day.

The coach returned home and decided he would buy that house at No.2. If the worst ever happened to his own big No.2, he would have this house and this day as a constant reminder, and somewhere to bring not only his family but other footballers over the years.

A football story acknowledging the career of an outstanding footballer should perhaps dwell on his best period, not his worst. But this story must, because the cancer that did not kill him to an extent  defines an essential part of Jarryd Roughead the footballer. It defines the defiance and courage of a personality and informs the warmth and love for him from the broad community.

To speak of what Roughead did on the field is to glorify games and play; to speak of how he carried his life speaks to something more essential.

Clarkson calls him a post-war footballer, a player with a mental disposition from a different era.

At his press conference announcing his retirement, Roughead didn't speak of the cancer, but Clarko did and he was right to, because it needed acknowledging.

A ball sport is hard to play when you can't feel your feet. Roughead did.

The club and coach didn't think Roughead would play again when he was diagnosed. They saw him as he endured the poison that was flushed through his body to kill the disease, but was also unsparing in the damage it did to the rest of the body.

To be a footballer again, he had to recover not only health, but the fitness to be good. On the field he would never be great like he was before, but who can be surprised at that? The greatness was in getting back at all.

The recovery was not easy. Roughead couldn't feel his feet for about 18 months after the treatment. The drugs left his feet numb for more than a year. A ball sport is hard to play when you can't feel your feet. Roughead did.

Roughead spoke at the press conference held in the gym at Waverley, appropriately set against steady drizzle outside, of the warmth and excitement he felt coming to the club each day and never having done any thing but seasonal work all his adult life.

Asked what he would not miss about football? Coming to Waverley, with its lovely weather, he shot back.

Roughead recalled his career and spoke of his first game not with great excitement but disappointment, still, because Hawthorn lost.

If forced to choose which of his four flags was his favourite, Roughead nominated the third, in 2014. It was revenge on Sydney for the lost grand final in 2012. Unstated was that his friend and forward line teammate Buddy Franklin was by then playing for the Swans. Roughy kicked five that day. Buddy booted four. 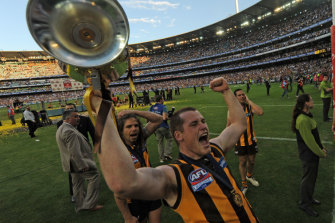 Roughead enjoyed correcting his coach when he talked of Franklin and Roughead teaming together for the Hawks and what it had meant for the club in winning four flags. No, Bud has two not four, Roughead smiled. He was a Swan by the time Roughy won his third and fourth. 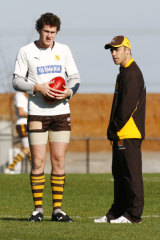 Roughead with Alastair Clarkson at training in 2007.Credit:Vince Caligiuri

Franklin is an unavoidable part of the day of Roughead's retirement. The pair who arrived only three places apart in the draft were a tandem act for most of their careers.

On the day Roughead departs, the magnitude of the Sydney contract that lured Franklin away is drawn into sharper focus. Franklin will be a Swan for three more years after this and earn nearly $4 million across that time – $1.4 million, $1.5 million and $1 million. Franklin has played just nine games this year. But that is a Sydney story, whereas this is a Hawthorn one.

When they were together, Franklin and Roughead were Brereton and Dunstall-like. That was how Clarkson felt. That period in 2008 when they were just boys, not yet 100 games into their careers, they kicked nearly 200 goals between them (Franklin booted 113 and Roughead 75). That was the year Clarkson most fondly remembers; it was their peak, if one had to be isolated.

Hawthorn were challenged for how they had treated other recent champions of theirs as they exited the club, but there were pragmatic reasons to argue each case.

There is no challenge to how they have honoured Roughead. He will come back and play one more match – at least. Who knows, he might play the week after, too.