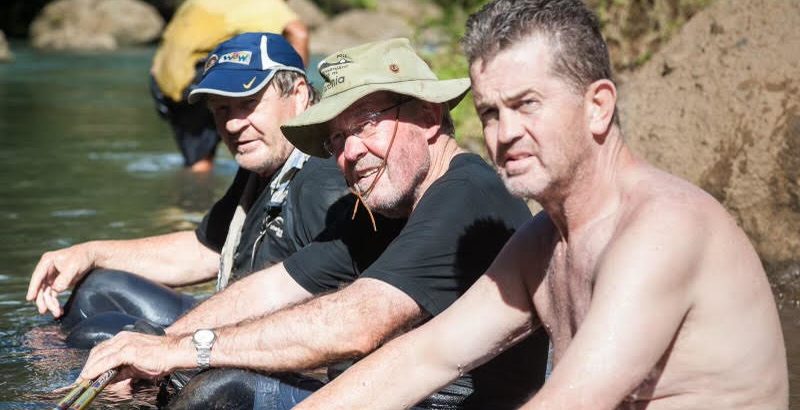 Rugby league has lost a true mate following the death of Tom Raudonikis – and many of us who played with, or coached him, have now lost their best one.

The former Australian halfback — who represented the positive aspects of rugby league’s selfless, sacrificial character — died at 7.15am on Wednesday in a Gold Coast hospital, six days short of his 71st birthday. 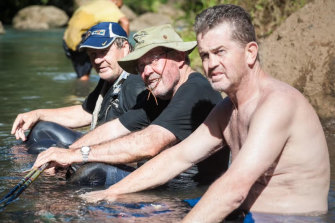 Tommy Raudonikis with Roy Masters and Phil Sigsworth during their adventures on the Kokoda Track in 2012.

Just as he was set to be moved to a general ward and as his loving partner, Trish Brown, and his closest friends thought he had rallied from yet another bout of cancer, his body surrendered.

It is almost exactly two years since Trish called me and I flew to the Gold Coast as cancer threatened to strangle Tom’s carotid artery.

“You’ve got to die some time,” he said, as he looked up from his chair, managing only a woeful but
gentle smile.

Chemotherapy had failed and his body could not endure more radiotherapy. He had been scheduled to visit a doctor who could offer some hope, so Tom, Trish and I went to his surgery.

Every question Dr Mohammed Islam asked in terms of previous treatments, Trish answered, quoting dosages to the milligram of a multitude of prescribed drugs, including their side effects.
Confident Tom had a great carer and perhaps mindful of the regard in which he was held, Dr Mohammed – as he became known to us – placed Tom on an immunotherapy trial.

Afterwards, as we sat on a park bench, while Trish collected her car, Tom asked me to highlight the main points of the meeting.

It was as if we were back in the Lidcombe Oval dressing-room and I was carefully taking him through a game plan.

We reviewed what the doctor said and made a pledge – if he was fit to travel in December that year, Tom would be my guest at an annual Carbine Club event held in Singapore, at which funds are raised for disadvantaged kids. 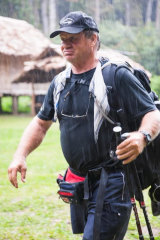 Last month, Tom and Trish made a trip south, with Tom having agreed to speak at two functions on the Central Coast and Newcastle.

Phil “Siggy” Sigsworth, a Newtown Jets teammate, drove down from Port Macquarie for the Newcastle talk and echoing the words of so many, told Tommy: “You are my hero.”

But the journey flattened Tommy, causing an infection and he was admitted to hospital and soon moved to the intensive care unit.

John “Singo” Singleton, another of Tommy’s enduring mates, together with Sigsworth and myself, had arranged to meet at what Singo called “a fat camp” in the Sunshine Coast hinterland, with a view to driving to the Gold Coast to visit Tom.

But just when the doctors had woken him from his induced coma, the Queensland government announced a three-day COVID lockdown and we could no longer travel.

Trish kept the communications up via four- and five-per-day texts and we thought he was going to be OK. “Happy Easter,” Trish texted on Easter Sunday. “Tom had his breathing tube out this morning … gets a bit stroppy but I said you must be patient … Wants to go for a walk, that might happen tomorrow … he wants the chocolate I bought for the staff.”

But on Wednesday at 5.48am came the warning message of the thief in the night: “Just so you don’t get a shock. Tom is back in ICU.”

Finally, blood cancer conspired with 30 years of testicular cancer, a quadruple bypass, cancer of the neck and throat and enduring back and shoulder pain to do what gang tackles of British, French and New Zealand players could not.

Factor in the early death of his brothers and the loss of a grandson in a rugby league match and Tommy has endured more than almost all of us.

He was basically orphaned out for a year when living with his migrant family in Cowra. A friendly police sergeant took him in, with Tom announcing at the doorstep: “I’ve only got two shillings and a pair of new sandshoes.”

Yet, in post-football days, he managed some memorable walks with Singo, Siggy, Col Murphy and me, including a 2012 Kokoda trek.

In some ways, his death only three days after Easter Sunday is an Easter story, given the resurrection Dr Mohammed gave him, his death and the message of love he left.

The tributes to him within hours of his death are manifold, with Singo tearfully saying: “He’s the most unique character I’ve ever met. He was so positive.”

Rugby league has lost its best one.

Sports news, results and expert commentary delivered straight to your inbox each day. Sign up here.