Veteran St Kilda ruckman Paddy Ryder has been named to play off just a four-day break against a rested Nic Naitanui in what dual Saints best and fairest Sam Fisher says is probably the club's biggest game in nine years.

Ryder, 32, has been named alongside fellow St Kilda big man Rowan Marshall as the Saints look to combat Naitanui – who former North Melbourne and Geelong ruckman Hamish McIntosh said was in career-best form – in Thursday night's game against West Coast at the Gabba.

Naitanui was rested from the Eagles' loss to the Western Bulldogs last Sunday, with the 2012 All-Australian recalled as his side vies for a top-four berth.

But West Coast have been hit hard by injuries, with Mark Hutchings (hamstring), Lewis Jetta (calf), Dom Sheed (hamstring), Brendon Ah Chee (finger) and Jack Redden (thumb) all out of the side that lost to the Dogs. Elliot Yeo (groin) and Luke Shuey (hamstrings) were already sidelined, meaning the Eagles' midfield depth is being severely tested.

Midfielder Hamish Brayshaw, the brother of Melbourne's Angus and Fremantle's Andrew, has been selected for his AFL debut. Will Schofield, Shannon Hurn, Jarrod Brander and Jack Petruccelle have also been included for the Eagles. Ruckman Tom Hickey makes way for Naitanui.

The Saints have named defender Nick Cofield despite the youngster hurting his ankle late in Sunday’s win over Hawthorn. Forwards Tim Membrey and Max King are back for the Saints, while Nick Hind has been recalled. Ryder has been chosen to back up off the short break, with Ryan Abbott, Ed Phillips and Jonathon Marsh dropped. Rain is forecast for Brisbane on Thursday night. 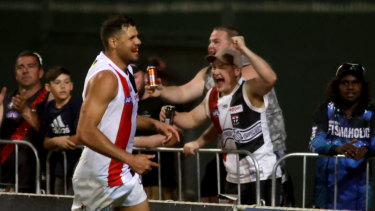 Paddy Ryder celebrates a goal for the Saints.Credit:Getty Images

McIntosh, who had worked as Carlton's ruck coach until being laid off as part of COVID-19 cost-saving after round one, said Ryder and Marshall were as well-equipped as any ruck combination in the league to tackle Naitanui, who is equal-seventh in this year's AFL Coaches' Association player of the year voting.

“He’s easily the most dominant ruckman in the comp in terms of the impact he’s having on the game. It’s the best I’ve seen him play," McIntosh said on Wednesday.

“A side going against Nic Naitanui, you’d want to have a two-pronged attack. St Kilda are as good as anyone, especially the quality of those two ruckmen.

“You would be relying on Ryder to do the bulk of the centre-bounce work against him, due to his athletic ability, and then you probably roll in Marshall around the ground a little bit more because he’s obviously a bit stronger than Ryder, to match-up with Naitanui’s strength." 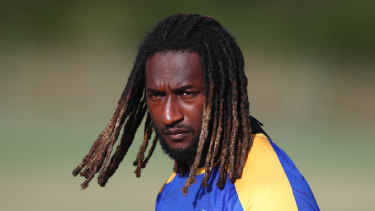 The stakes are high for St Kilda, who can just about secure a finals berth by beating the Eagles.

Thursday marks nine years to the day since the Saints' most recent final – an elimination final defeat at the hands of Sydney in 2011. Days later coach Ross Lyon defected to Fremantle, and the Saints have largely struggled since.

Fisher, an All-Australian defender in 2008, was a member of that 2011 side and said that Thursday night's match was probably as a big a match as the club has had since.

“No finals since then. It’s a pretty important game obviously for the club, and everyone involved at St Kilda," Fisher said.

“If they beat West Coast, who I think are obviously one of the contenders this year, you beat them … that’s going to confirm that they’re right in it."

Fisher, who retired at the end of 2016, paid tribute to St KIlda coach Brett Ratten, who he said had been able to strike an instant rapport with people, including himself, from their limited dealings.

“He’s such a lovely guy. You can tell he’s upbeat and he’s happy to be there, and wants everyone to improve."