Geelong coach Chris Scott says a level-headed approach to overcoming the Western Bulldogs' first-quarter lead was the key to the Cats’ 11-point triumph on Friday night.

The Cats clawed their way back into the game over three quarters, taking the lead for the first time late in the final term after the Bulldogs kicked six unanswered goals to begin the contest. 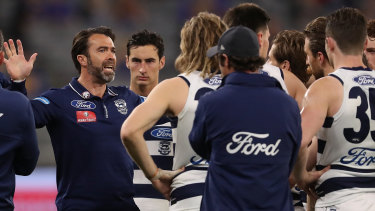 Chris Scott says the Cats were level-headed in the face of a big margin. Credit:Getty Images

Scott said they would review the win with "humility" given the Bulldogs' injuries.

"Well, I think we've got to approach the win with a good healthy level of humility. We played well in the last three quarters to slowly get over the top of them.

"But they had some things go against them as well. It's rarely the case that it's all your brilliance. Often takes a bit of luck and a few things going your way and unfortunately for them a few things went against them.

"That made it a lot more difficult and that would be disappointing for them. They were just fantastic in the first quarter. We contributed to it a little bit. That's always the case as well."

Luke Beveridge said he was proud of his side’s effort in matching it with a top team, despite fading after the first quarter.

He said injuries to Laitham Vandermeer and Easton Wood (both hamstring) would be assessed but that the former’s looked more serious.

“Losing two players before half-time [against] a mature side that's seasoned and they're going to come. So I think – as I said, I'm extremely proud of the boys,” Beveridge said.

“Credit to Geelong. They fought their way back. As we expected them to. They've been quite sensational at times this year. So I'm really proud of the boys that they really made them fight and us being two down, it will do us the world of good to know that we can get that close.

"As much as we did some things right, you know, Geelong tested us after we were on top early.

"But we won't get down on ourselves. You know, we're still sniffing around. We'll recover well and we'll look forward to the challenge against the Eagles."