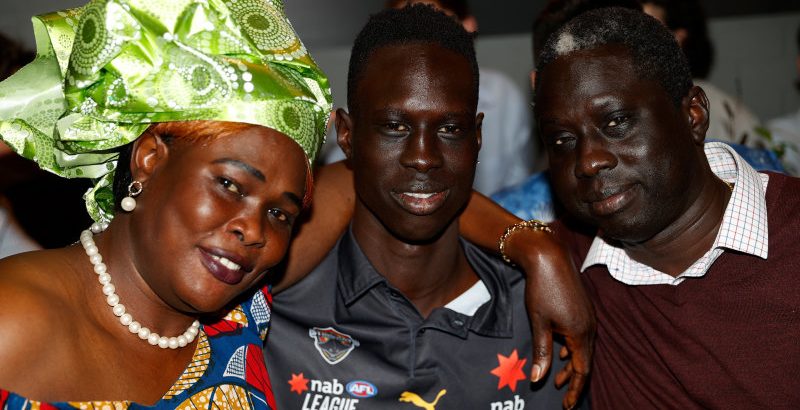 Two players with South Sudanese heritage were selected in the first round of the AFL’s national draft on Wednesday, a historic night for the game.

The Suns chose Mac Andrew – who was born in Egypt to South Sudanese parents – with pick five in the national draft, while the Giants added South Australian Leek Aleer, who left South Sudan with his mother Tabitha and sister Agot when he was six. 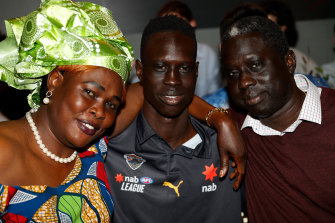 Mac Andrew with his family on draft night.Credit:Getty Images

The pair has added to the depth of talent from the South Sudanese community now in the AFL that includes Port Adelaide’s Aliir Aliir and Melbourne’s Majak Daw.

Andrew is the first player of South Sudanese heritage selected in the first five picks in the national draft. He was a member of Melbourne’s next generation academy and Aleer was part of the Crows’ NGA, but neither club could match the bid under new rules that stop clubs having priority access to NGA graduates chosen in the first 20 picks.

“It’s pretty crazy. My parents sacrificed a lot for me to get here,” Andrew told Fox Footy.

Giants recruiting manager Adrian Caruso said while choosing Aleer at pick 15 might have surprised some clubs, their decision to pick him was easy once they identified a need to add a tall to their list with one of their first two picks. 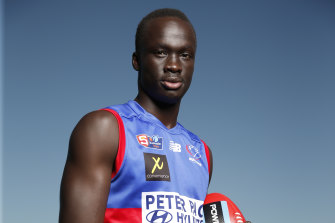 He said Aleer, who played for Central District in the SANFL, was one of the most impressive players the club interviewed as they prepared for the draft.

“We were always keen. His athleticism impressed. Everyone has seen the videos and the numbers, and he has obviously got that enormous leap,” Caruso said.

He said Aleer’s intercept marking was also outstanding and he would develop in their system, with Sam Taylor emerging as one of the game’s best young defenders.

“He is a kid who has got a really good head on his shoulders. We know he will put everything in to his footy,” Caruso said.

The selection of the high-leaping Aleer was the first shock of a draft that had gone according to predictions until that point.

Although predictable, the opening moments were busy, with two pick swaps, two bids for father-son selections and North Melbourne’s first ever No.1 pick, which they used to land South Adelaide midfielder Jason Horne-Francis.

It was the fourth consecutive national draft in which at least two bids had been matched within the first 10 selections. The Giants made a bid for Sam Darcy at pick No.2 before selecting Sandringham Dragons midfielder Finn Callaghan.

Callaghan said he had modelled his game on Western Bulldogs skipper Marcus Bontempelli, but he could not wait to line up alongside another smooth-moving midfielder – GWS’ Josh Kelly.

The decision adds to the long-standing rivalry between the Giants and the Bulldogs, with Greater Western Sydney having no hesitation in bidding for Darcy, who is, coincidentally, the godson of Giants coach Leon Cameron.

The Western Bulldogs matched the Giants’ bid for Darcy after a series of pick swaps in which they traded pick 23 to Geelong in exchange for picks 32 and 34.

Gold Coast then made a bid for Nick Daicos, the son of club legend Peter, which meant the Magpies only had to match the points for pick four. The exciting midfielder had been tipped to be selected in the top three all season.

Collingwood had ensured they had enough points to secure Daicos on the opening day of trade period when they did a deal with the Suns to secure selections 22, 46, 58 and 79 and a future fourth- round pick for a series of future picks.

The lifelong Hawks supporter joins the club his great-grandfather Alex Lee played 31 games for from 1933-1935, with Ward joking after he was selected the decision would save his family as they did not “have to buy any more merchandise”.

“I’m so happy to get to the Hawks and can’t wait to get started,” Ward told Fox Footy.

Ward is the second top-10 pick to arrive at the Hawks in the past two seasons following defender Denver Grainger-Barras being selected at pick six in 2020. They are the only players Hawthorn have chosen with picks inside the top 10 since they selected Mitch Thorp at pick six in 2006.

With Matthew Johnson on the board, the Hawks are likely to chase Fremantle’s pick 19 so they have the first pick on the second night of the draft.

Richmond boosted their defensive ranks choosing Josh Gibcus at pick nine and Tom Brown at pick 17 while Essendon were delighted to land big-bodied midfielder Ben Hobbs. List manager Adrian Dodoro said four clubs attempted to trade their way up to the Bombers’ pick 13 to get Hobbs, who he said was ready to go.