Geelong will put Joel Selwood's injured finger to the test later this week in his bid to play the semi-final against Collingwood, while Jack Steven has been ruled out.

Selwood dislocated his finger late in the loss to Port Adelaide on Thursday and had surgery in Queensland the day after. 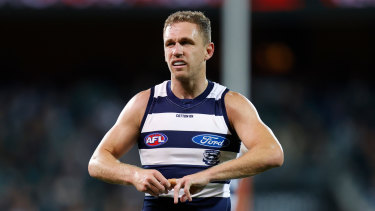 Joel Selwood has had surgery on his injured finger.Credit:Getty Images

"The aim or objective of that operation was to stabilise his finger, and we all know Joel very well. We have seen him over many years, he has been out training today, which is exciting," Cats football boss Simon Lloyd said.

"We know what his mental fortitude is like so he will give himself every opportunity to play.

"We will test it out fully come Friday."

Meanwhile, Steven won't recover from a hamstring strain, suffered in a scratch match on the weekend, in time for the clash with the Magpies. Lloyd did not rule him out for the season should the Cats win.

He was dropped for the loss to Port.

"That will rule him out for this week. It was unfortunate because Jack had been going so, so well.

"We expect him to do his rehab and recover as quickly as he can."

Sam Simpson made a successful return from injury in the same scratch match and is available for selection.