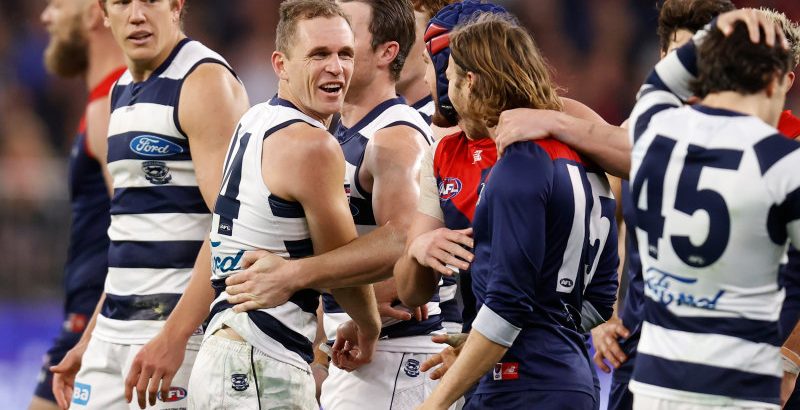 Geelong captain Joel Selwood understandably said after his side’s stinging 83-point finals exit that he wanted to keep playing for a club that remained in premiership contention.

“I would rather be part of a club that just keeps knocking on the door and having a go at it, the final four again this year,” Selwood said on Seven.

“Some people look at it, why don’t you just drop back and go back to the start but I would rather be in a club that fights, fights tooth and nail right to the end.”

The Cats have been brilliant in rebuilding on the run for more than a decade, having missed the finals only once in Chris Scott’s tenure. Whenever it appeared they were slipping or had plateaued, they have double-downed and been able to add a piece or two which, combined with their home-ground advantage at GMHBA Stadium, ensured they would at least finish in the top four. Seven preliminary finals (but only two wins, and one flag) under Scott, or a 15-year run if the Mark Thompson era is included, underlines that case.

However, as they come to terms with their heaviest finals defeat in 52 years, when they not only were “battered”, as Scott said, but were old and slow, it has to be asked whether they have now reached a fork in the road and need to make a philosophical change.

Two preliminary-final defeats and a grand-final loss over the past three years means the Cats must determine whether the core of this group, built to win now, can undergo another tinkering in an attempt to get over the hump, or whether it’s time to take a step back. 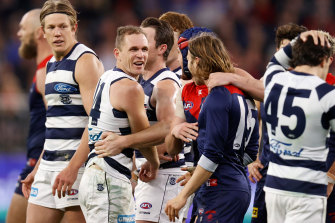 There are several decisions to be made which will set the underlying mantra for the next five years. Scott is contracted until the end of 2022. Do he and the Cats want that partnership to continue? If so, does that mean they are still all in on immediate success? Or is he open to a chat with the Blues, who say they will make that call.

And if Scott stays, is the game plan open for change? The Demons’ intense pressure and run meant the Cats’ controlled, high-possession game, particularly in the back half, crumbled for they were not given space or time to set up. Is it time for a more chaotic style? A lack of accountability at stoppages (the Demons scored 101 points from this) was also puzzling. And then there is their poor record in qualifying finals and an overall inability to heavily score in September.

Incoming chief executive Steve Hocking will have a major say, regardless of whether Brian Cook remains in a consultancy role or heads to Princes Park to replace Cain Liddle. Hocking, a former player and football operations boss with the Cats, is a no-nonsense operator and knows intricately how the club operates.

Then comes a call on the dozen players aged at least 30 heading into the trade period. Of these, 11 fronted the Demons and only Patrick Dangerfield had much of an impact.

Jenkins has managed only two senior matches since crossing from the Crows after the 2019 season and his time is up. Higgins, contracted for next year, is not the player he once was and has been used as the medical sub in recent weeks. Henderson had a largely miserable finals campaign and fumbled too often. Stanley, well beaten by best-on-ground Max Gawn, is off contract but appears likely to be given a new contract. However, is he really the best ruck option?

Selwood, All-Australian selection Hawkins, Smith and Blicavs all had strong seasons, while Dangerfield was impacted by an ankle syndesmosis and fractured finger. But it’s doubtful at this stage of their careers that they can all get better.

All Australian Tom Stewart was desperately missed as a rebounding half-back after he was hurt in round 21. His absence meant Blicavs became a full-time defender, and there was more focus on the shaky Henderson, who could retire. The Cats were a defensive mess against the Demons.

The Cats say they will fight to keep fringe youngsters Jordan Clark, Quinton Narkle (linked to Richmond) and Charlie Constable, with list and recruiting boss Stephen Wells acknowledging that opportunities need to be created for young talent to have a consistent run.

Is that waiting period now over? If not, there could also be trade value there. Remember the Cats don’t have a first-round pick. Their indicative selections are 30, 32, 35, 53 and 89. Rival clubs say the Cats may look to bundle up a couple of their second-round picks to move up the draft and perhaps snare a highly rated midfielder.

The Cats have been a model of stability, but this latest defeat is arguably the biggest challenge to this since the famous Cook review of 2006.