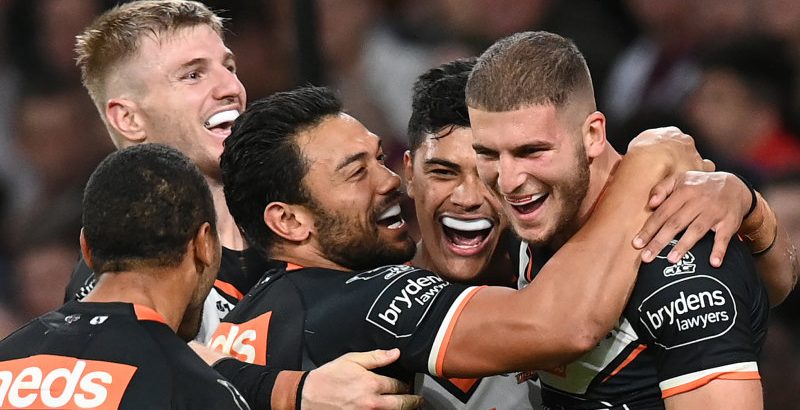 Take a second to process this little nugget of information.

Is it time the Wests Tigers forget about the finals for a couple of years?Credit:Getty

On Saturday afternoon, Wests Tigers are chasing just a third win in a row. They have failed to do so since the start of the 2018 season.

The Tigers’ season goes on the line – again – in Rockhampton against Cronulla.

Should they crash to defeat, it will almost certainly consign them to a 10th straight year without finals football. Win and their finals hope may still rest on beating Penrith and former coach Ivan Cleary the following week.

No club in the NRL era has gone so long without a September cameo.

Parramatta and Souths both went seven seasons without finals football. The Panthers went 18 seasons without a post-season when they first entered the competition in 1967.

So now one question is being asked by some at Tiger Town: should the club should forget about finals altogether and pour their energy into giving the club’s Generation Next all the time they need.

Does any fan reading this seriously think the Tigers can knock off the Sydney Roosters or Manly in week one of the finals?

The Tigers have always gone big. At the start of 2015 during a swanky members’ breakfast, the club released a glossy strategic plan, which included becoming a top-four force by 2017. Didn’t that go well.

Liam Fulton featured in a few finals series with the Tigers, including 2011, and said the club should put the post-season on the backburner. 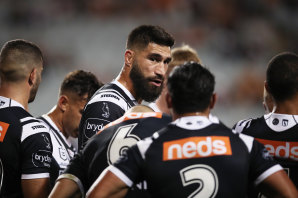 He loves coach Michael Maguire and his passion, and is convinced Adam Doueihi is the club’s next captain, but also wants to see investment for the long term, not panic buying for the sake of prolonging Mad Monday by a week.

“I think we should strip it right back and worry about our juniors, keeping the good ones and developing them,” Fulton said.

Tommy Talau, Shawn Blore, Daine Laurie, Stefano Utoikamanu and Tuki Simpkins, among others, are going to be better with time. Adam Doueihi is seen as a future skipper, while the club is in the hunt for a quality front-rower – Canterbury’s Luke Thompson has already been discussed – along with an outside back.

They have four spots to fill for next year, and money, but will not pay overs for talent, even when rivals are prepared to offer less.

The club has a $71m Centre of Excellent being built in Concord. And premiership coach Tim Sheens is about to return home in October and make sure all rivals, including Canterbury and their general manager, keep their paws off the giant junior base in the south-western Sydney corridor.

Tigers chief executive Justin Pascoe spent time working at the Panthers, but was happy to declare his club’s junior base would overtake Penrith’s in good time.

Pascoe says every year the Tigers do not play finals football it is a “fail”.

“But it is only a concern if we’re not progressing and developing, which we are,” Pascoe said.

Skipper James Tamou played in a grand final with Penrith and then lobbed for pre-season training at the Tigers before Christmas. The thing that stood out for him most was “the standards at training”.

There was talk within two weeks of him being at the Tigers he wanted to shuffle his way back down the M4. He quickly denied that was the case.

“And this year I’ve learnt more about myself, I’ve learnt how to be a better human and leader,” Tamou said on Friday.

“There are so many good signs for the future here. We’re almost there.”

He has seen the development. One of the proudest moments for him this year was sitting in the sheds after a 66-16 flogging against the Storm, then seeing young prop Utoikamanu and Thomas Mikaele feel comfortable enough to speak their minds.

If Melbourne are well drilled and Penrith entertaining to watch, Tamou said the Tigers prided themselves on being adaptable and “loving a scrap”.

Finals or no finals, there could be a lot to love about the Tigers in the coming years.