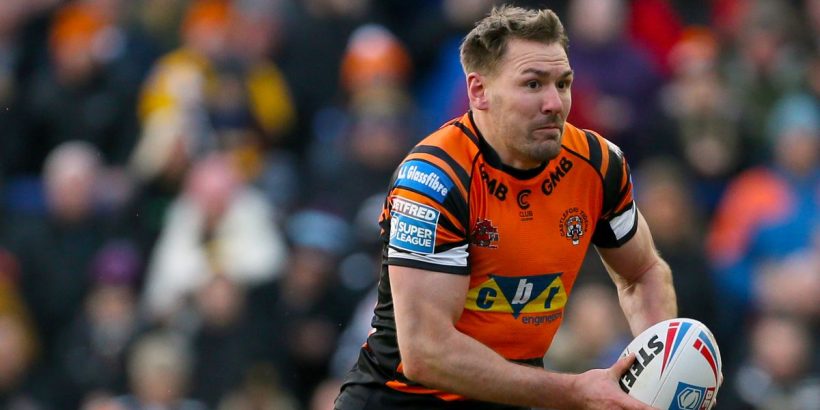 Michael Shenton says his Castleford side are like caged Tigers after an “unacceptable” 2020 campaign.

Daryl Powell’s side went into March’s lockdown in second place after sweeping aside champions St Helens 28-14 in the sport’s final game for almost five months.

But after the season restarted Cas won just twice in 11 attempts, slumping to an eighth placed finish that was their worst since 2013, the year Powell took over.

It led to a no-holds-barred squad meeting before Christmas where the Tigers players held their hands up over last year’s performances.

And skipper Shenton believes he heard the right kind of noises to suggest a marked improvement when Super League kicks off in three weeks’ time.

“The meeting was a group of players that were frustrated with what we’ve been putting out there and we just put it all on the table.

“We’ve been a team that’s been consistently top four, top five since Daryl came in.

“It was extremely disappointing to have that kind of tail-off after lockdown, and it was such a positive start beforehand.

“We were really growing as a team, but coming back, we just couldn’t quite pull it together.

“There was a few close games in there when we got beat in the final minute, against Hull and Warrington, which would have made things look a little bit different.

“But when things aren’t going for you and you’re not in the right space with the team not operating as it should be, those things go against you.

“That’s what led to the frustration over last year, but it’s created a motivated group going forward.”

Now Shenton – in the final year of his contract at 34 but insisting now is not the time to discuss his own future – wants the Tigers to right the wrongs of last year.

Another long-term injury to luckless winger Sosaia Feki provided a significant pre-season blow, but Shenton believes that otherwise, the signs have been good that last season won’t be repeated.

He added: “We’re ready for 2021 and we know it wasn’t good enough last year for our standards.

“To be a Cas player that just wasn’t good enough, and right across the board everyone’s accountable.

“But that meeting has just set the tone for what’s been a really great pre-season so far.

“Everyone’s bought into it, we’ve got real good unity within the group and everything’s looking real positive for 2021.”