The good news continues to roll in at Collingwood with Steele Sidebottom and his partner welcoming the birth of a baby girl, however, there is no plan in place for his return to the Queensland hub.

Sidebottom's fiance Alisha Edwards gave birth to baby Matilda on Saturday and both are doing well, a Collingwood spokesman confirmed.

The Magpies will not pressure Sidebottom to make a decision about his immediate future, nor do they expect he must return this season. The choice is one for Sidebottom and his family. 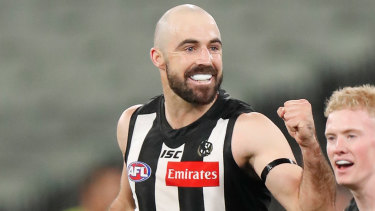 Collingwood is giving Steele Sidebottom all the time he needs to decide if he will play again in 2020. Credit:Getty Images

The club is letting Sidebottom and Edwards enjoy time with their baby and will let the star 29-year-old contact them when he is ready to discuss returning to Queensland to play.

Collingwood play their last game on September 21 against Port Adelaide, and with the pre-finals bye could play their first final – should they qualify – as early as Wednesday September 30.

To be ready for that potential date, Sidebottom would have to enter quarantine in Queensland by Wednesday.

Since then, Collingwood have defeated Carlton and lost to Brisbane. They play Gold Coast on Monday and a win would go close to securing them a finals spot.

The news of Sidebottom's child comes on the back of Collingwood welcoming back key injured stars Jordan De Goey and Adam Treloar for the Suns clash.

The Pies are less confident of Jeremy Howe (knee) returning this season however.

"We've never said never with Howie but the likelihood is that he will struggle to get up," coach Nathan Buckley said on Saturday.