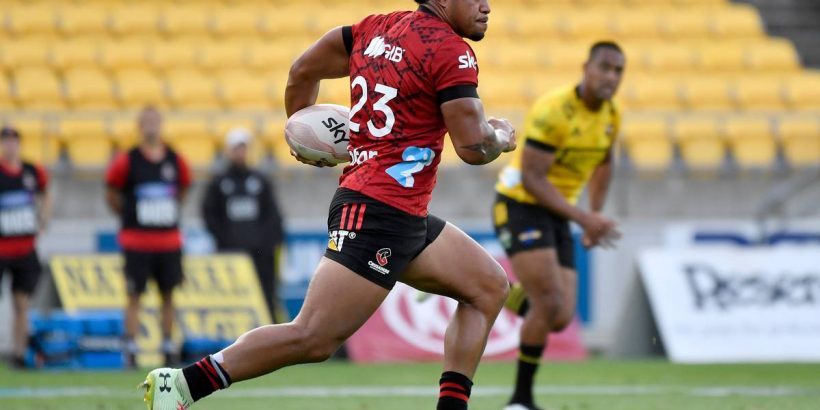 As he embarks on a maiden start in the midfield, rising Crusaders winger Leicester Fainga’anuku has drawn comparisons to a legendary All Blacks captain from his coach Scott Robertson.

Fainga’anuku has been named to start at centre in place of the injured Jack Goodhue for this weekend’s clash with the Chiefs in Hamilton. Goodhue’s been sidelined for the remainder of the rugby season with an anterior cruciate ligament injury.

It will be the 21-year-old’s first crack running out in the 13 jumper, having started on the left wing in five of his side’s six games in Super Rugby Aotearoa, while coming off the bench in the other.

Fainga’anuku brings with him a scintillating array of attacking traits to the midfield that have helped him emerge as New Zealand’s form winger and the competition’s most impressive strike weapon.

It has led to Robertson seeing shades of Tana Umaga.

“He’s [Fainga’anuku] one that can play centre, a bit of Tana about him – he’s got that skillset where he can swap in and out and he’s got some really good guys around him, so David [Havili] looks after him and a couple of good wings will guide him around nicely. He’s a power 13 for us,” Robertson says.

Through six matches in the competition, the 21-year-old Fainga’anuku leads the way in metres carried with 526, 129 more than his nearest competitor in teammate Will Jordan. He also ranks second in defenders beaten, carries and clean breaks, building a healthy push towards a maiden All Blacks selection later this year.

Umaga was a physical presence predominantly in the midfield, but also played on the wing in his early years for Wellington and the Hurricanes.

Whether Fainga’anuku, like Umaga, eyes a permanent switch to the middle remains to be seen, but Robertson says the rising star is excited for his chance.

“He loves the ball in his hands and he’s building his skillset along the way. It was a plan to give him an opportunity [there] this season but probably just not in these circumstances.”

The minor reshuffle in the backline is nothing compared to what Robertson has gone for in the forwards. The entire pack has changed with George Bower, Brodie McAlister, Michael Alaalatoa, Mitchell Dunshea, Quinten Strange, Tom Sanders and Ethan Blackadder all coming into the starting side, while Scott Barrett moves to the blindside.

Robertson says they’re coming off a short turnaround and a taxing matchup with the Hurricanes.

“It was our highest running metres, it was our biggest ball in play we’ve ever had against the Hurricanes,” he says.

“That’s the hardest part of this competition because you want continuity, you want cohesion so you play a team for a period of time and then all of a sudden you need to make changes when you get to week seven, week eight of it and give them a crack.”

Manasa Mataele has been named on the bench, set for his first appearance in the red and black jumper since March last year, returning from a pectoral injury.

For the Chiefs, loose forward Lachlan Boshier will make his return from a foot injury, replacing younger brother Kaylum at openside flanker, who drops to the bench.

Damian McKenzie gets the nod to start at first-five, which sees Chase Tiatia start at fullback and Kaleb Trask dropped from the 22. Alex Nankivell comes into the midfield to partner Anton Lienert-Brown, with Quinn Tupaea out of action for six to eight weeks with a knee injury.