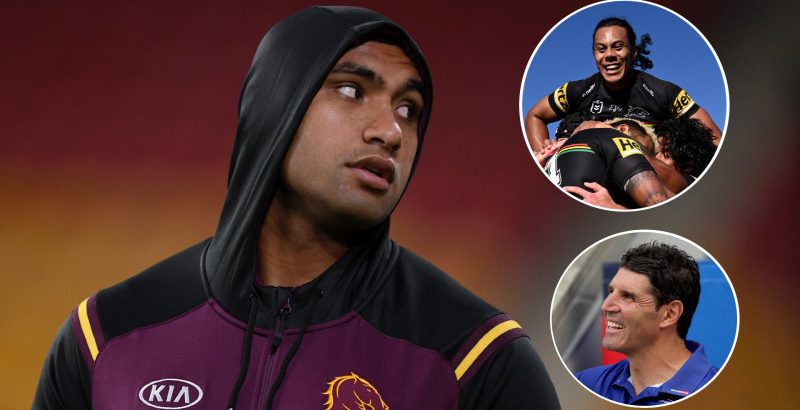 Inside a modest suburban home on Cressy Street in Canterbury, an eight-year-old Tevita Pangai jnr watched on with his family as the Bulldogs lifted the 2004 premiership.

“There were blue and white cars going off in the streets,” Pangai recalls. 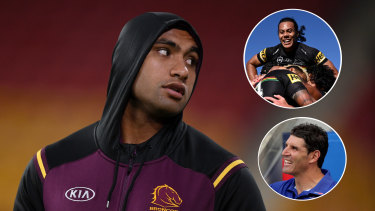 Tevita Pangai Junior will join the Bulldogs via Penrith.Credit:NRL Photos

“Houses were painted blue and white. It was crazy. The whole place was crazy. I still remember it was Sonny’s (Bill Williams) first year. As a young Polynesian kid having a blinder of a year, for me as a young kid to see that was something I aspired to be like.”

It was the last time Belmore celebrated a title. Seventeen years on Pangai is preparing to return to a success-starved community looking to put the bite back in the once proud club.

But the excitement of what lies ahead, a pit-stop at the high-flying Panthers before linking with the Bulldogs in the off-season, took a back seat as the realisation hit home on Wednesday.

With the ink still drying on his termination with the Broncos, Pangai picked up the phone and dialled his old coach last night. 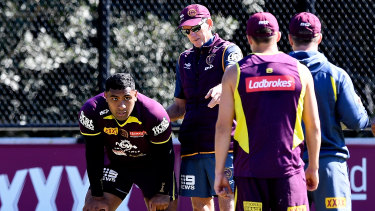 Tevita Pangai Jr takes instructions from former coach Wayne Bennett during their time together at the Brisbane Broncos in 2018.Credit:Getty Images

“I didn’t want to leave. I’m shattered I have to leave, but that’s footy. Sometimes you get the tap on the shoulder and you have to make way. They said it would be best for both parties. Ben Ikin (new Broncos general manager) is a nice fella. I got to know him for a few weeks.

“It was different not seeing him on my screen every night. Both him and Dave Donaghy have been great to me. I’m happy they get what they want and I get what I want, which is an opportunity to work with Gus and Trent in Sydney.”

Pangai, who personally phoned Bennett during his time at the Raiders to land a deal at the Broncos, has struggled to live up to the hype that was set during his time under the veteran coach.

While he admitted Bennett’s exit had a huge impact on his football, he refused to use it as an excuse for his inability to consistently perform at a high level under Anthony Seibold and Kevin Walters.

“It was such a hard time in 2018, knowing which side to take,” Pangai said about the in-fighting at Brisbane. 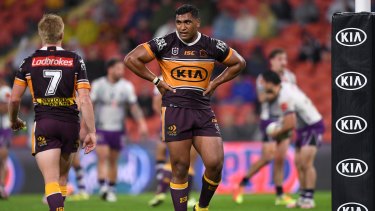 Tevita Pangai jnr is on the move. He will make a pit-stop at the Panthers before joining the Bulldogs.Credit:NRL Photos

“He’s one of the greatest coaches. He knew how to coach me. I wouldn’t say I’m different, but he knew how to get the best out of me. But at the end of the day it’s up to me to put in consistent performances. Payne Haas has had three different coaches, but his performances don’t waiver. That’s what great athletes do, when there’s adversity they can still play great footy.”

While his decision to join Canterbury on a three-year, $2.2 million deal from next season was made before Gould was appointed as the club’s new general manager, there’s no doubt Pangai believes ‘Gus’ and Trent Barrett can have a similar impact on his career.

“I love the roster they are building,” Pangai said of the Bulldogs.

“I’ve heard a lot about Trent and the way he sees the game. David Furner (Canterbury assistant coach) signed me when I was a young boy at Newcastle to go to the Raiders. Having him there looking after my defence and holding me accountable, then having Trent Barrett who is one of the greatest attacking minds in the game, it was an easy choice for me to go to the Dogs.

“Sonny is a good influence on me. In this time in my life I want to be around good people and strong-minded people.”

“The attraction of working with Gus and him working his magic with the roster, I think it’s going to be back to being a strong club again. It’s a big club, and once big clubs get rolling they are hard to stop. With Gus back, there’s only good days ahead.”

One of the concerns clubs had about signing Pangai was a perception that his character was questionable.

It’s something the Wests Tigers tried to float when they originally pulled out of the race for his signature – before coming back to the table with $400,000 more than they were first willing to spend.

While Pangai had no bad words to say about the Tigers, he is already making plans to ensure he has a support network around him to transform into one of the game’s premier forwards when he arrives in Sydney in the off-season. 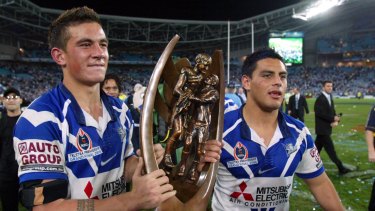 “I won’t live too far away from Sonny,” Pangai said.

As for the decision to turn down an offer from the Tigers?

“It’s nothing against the Tigers,” Pangai said.

“I just felt the roster the Bulldogs were building suited me. I’m sure the Tigers will build. They have a great coach in Michael Maguire that’s won a comp as a coach. Not many coaches can say they’ve gone to the big dance and won. I’m sure that they’ll find good players and build a good team.

“Michael Maguire and Adam Hartigan (Wests Tigers general manager) are good fellas. But at this time in my career I feel the Bulldogs are the best for me with their roster and coaching staff.”

Canterbury decided against signing Pangai for the rest of the year. It didn’t make much financial sense for the Bulldogs to waste salary cap space on a season that is already gone.

Given a fortnight earlier Penrith had decided against pursuing the 25-year-old in a cameo role for the remainder of the year, it seemed as though Pangai would finish the year at Brisbane.

Then on Wednesday, following the news of James Fisher-Harris’ return to Sydney to attend the birth of his child, the doors opened for Pangai.

“I thought it was all dead and buried,” Pangai said. “But I spoke to Ivan and Cameron Ciraldo and wanted to strike something. I told them I was willing to come. I know they have a strong team already. I’m glad I got the consent of the Broncos and Bulldogs. They’ve been helpful letting me go to a club like the Panthers. I think it will be a good for my development.”

Pangai will join the Panthers at their Sunshine Coast hotel on August 2 and play his first game for Penrith in that round against the Roosters, setting himself up with a chance to go from wooden spoon to a premiership. Some say he’s a risk to what the Panthers have built, but he insists Penrith aren’t taking a gamble on him.

“I don’t think it’s too much of a risk,” he said. “If it’s a small role off the bench or if it’s just helping out at training running shapes for the reserve grade team – I’m just happy to help out and learn, man.

“I want to learn off the great players they have like Nathan Cleary and the great coaches like Ciraldo and Ivan.”