Collingwood captain Scott Pendlebury says the midfield depth of both sides will be more important than star power as Collingwood prepare to do battle with Geelong in round one at the MCG.

Two of the best midfields in the competition will lock horns in Friday night's contest, with Geelong’s trinity of Patrick Dangerfield, Joel Selwood and Gary Ablett taking on the likes of Adam Treloar, Dayne Beams, Steele Sidebottom, Taylor Adams and Pendlebury himself. 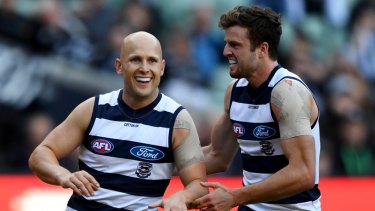 Midfield depth: Scott Pendlebury says it won’t necessarily be the big names, such as Gary Ablett (pictured), who will prove matchwinners.Credit:AAP

Mitch Duncan will also be thrown in to that mix, perhaps even more this year with Ablett likely to spend more time forward.

But Pendlebury believes it will be with the layers of midfield depth where the game is won and lost and the Pies won’t be expecting the big names to single handedly pull them across the line.

“Externally it’s exciting for people to talk about Dangerfield, Selwood and Ablett and it’s already happened with us with the likes of Treloar, Beamsy, Steele, myself, Tay, they’re all names and they’re big names,” Pendlebury told The Age.

“But give me a midfield who plays together, plays for one another, gels together and is willing to sacrifice for each other every day of the week over a midfield that doesn’t do that.

“I think both midfields … whoever can work harder both ways will be the team that helps their side get over the line.”

Pendlebury is adamant both teams will have a similar outlook when it comes to spreading the load and not simply leaving it to the usual stars.

“Without being Geelong’s midfield coach I daresay that they’ll be talking about the same things and while those guys are unbelievable players, they know it’s the best midfield group that will win, not the best players.”

Pendlebury will be hoping to overturn the recent record against the Cats, with the Pies losing the last two contests in low-scoring affairs.

The skipper was still a teenager when he played a preliminary final against Geelong in 2007, the first of three the two sides would end up playing against each other over the course of the next four seasons.

“The rivalry for the players that are still left from the great prelims and the grand final … they played some pretty good footy in the JLT. Their mix is still a little bit unknown with the guys they’ve brought in, [Gary] Rohan, Ablett and [Luke] Dalhaus up forward, how they’ve used Selwood at times … it will be interesting to see how they go.”