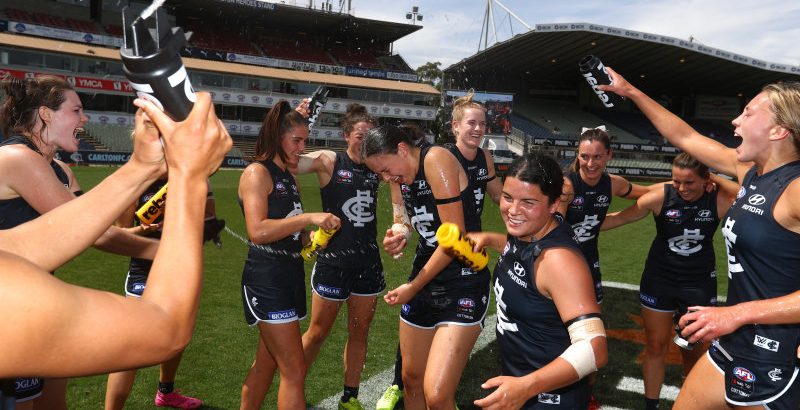 An injury scare to the 2020 AFLW best and fairest Madison Prespakis wasn’t enough to stop Carlton from beating Geelong by 33 points at Ikon Park on Sunday, keeping their pursuit of a finals spot on track.

In bad news, promising Blues youngster Mimi Hill also came from the field with an injured knee in the last quarter, a round after there were three ACL ruptures in the one weekend. The extent of the injury is still unclear. 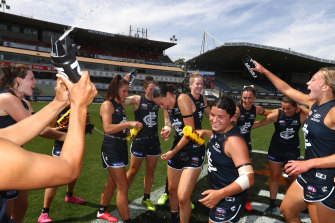 Carlton players celebrate after they defeated the Cats at Ikon Park on Sunday.Credit:Getty Images

The win – which came off the back of a brilliant performance by Prespakis, with a fantastic supporting role played by Darcy Vescio – keeps the Blues in touch with the top six as the AFLW season heads into its home stretch.

Prespakis landed awkwardly on her elbow in the first quarter and she did not join her teammates in the quarter-time huddle.

The 20-year-old midfielder was playing her first game back from a one-match suspension for rough conduct on Richmond’s Sarah Hosking and looked in fairly significant discomfort. 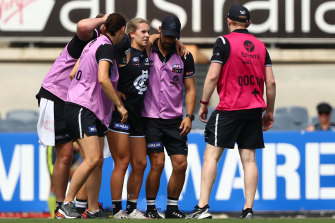 Mimi Hill is helped off the ground after injuring her knee.Credit:Getty Images

However, she came back in on the second quarter and continued to dominate the match. She collected 27 disposals, three tackles and kicked one goal for the afternoon.

Vescio was at her lively best early inside Carlton’s forward 50. She kicked two first-quarter goals from close range and then later in the quarter stood strongly in a tackle to handball to Serena Gibbs, who kicked the Blues’ fourth major of the match. 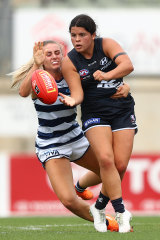 The Blues now sit only one match outside of the top six. They will play Fremantle next week at Ikon Park in a must-win clash, with their last two games much easier (Gold Coast and GWS).

In promising signs for Geelong they put in a much better performance than they did last week when trounced by Richmond. The Cats remain winless in 2021.