The rising Storm star was in the frame to replace Billy Slater at full-back this season after playing in both Storm’s trial games and impressing over the pre-season. 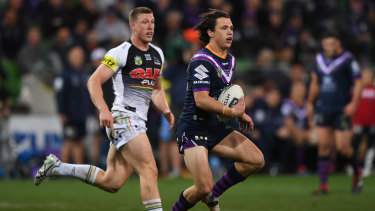 Drinkwater scored a try in the first half of the club's trial on Saturday but later went down injured in the 14-6 loss to the North Queensland Cowboys in Mackay.

The early diagnosis was a rupture and scans back in Melbourne proved that correct with Drinkwater to see a surgeon this week to decide when he will have surgery to repair the injury.

The Storm have stocked up on full-backs in recent seasons so they have Jahrome Hughes, who has played in the role before and looked a steady hand, while young flyer Ryan Papanhuyzen has shown plenty of pace as an attacker while still learning the position.

The best-case scenario for Drinkwater would be a return in June although pec injuries can take longer to recover from, depending on how quickly a player can regain their strength and their game conditioning.

The Storm open their NRL season against the Brisbane Broncos at AAMI Park on March 14.