Canberra coach Ricky Stuart has launched an attack on the Penrith players involved in a melee with his side and has called on the NRL to rid the game of jersey-tugging scuffles.

The Raiders were fined $10,000 on Wednesday after their physiotherapist became involved in the incident during the round five clash with the Panthers, and have since appealed the sanction. 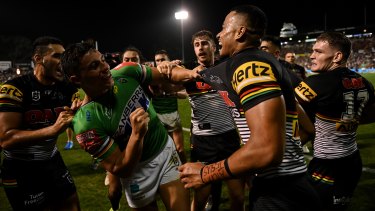 Tempers flare between Joe Tapine (left) and Stephen Crichton after a try by the Panthers in round five.Credit:NRL Photos

Crichton was fined $1,350 for his role in the incident.

“This jumper pulling and grabbing blokes by the back of the jumper … it’s a blight on the game,” Stuart said. “It’s ugly. It makes soft people very tough because you know you’re not going to get a punch in the head. There’s no consequences.”

The Panthers’ actions in the melee resulted in commentary through the week about the maturity of their players. Before their round six clash against the Broncos, coach Ivan Cleary defended the behaviour of his players and said he was constantly on the lookout to ensure his team was behaving the right way. 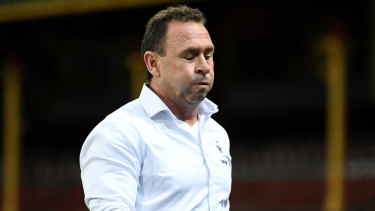 In response to the criticism, Panthers players shook hands after a try celebration early in the Thursday night game. But Stuart wasn’t impressed by what he saw from the Penrith side.

“I laughed watching it back … when our physio got pushed out of the way, Jack Wighton came in to sort it out and settle it all down and a lot of egos that were in that melee were deflated very quickly,” Stuart said. “You don’t find tough kids walking into these melees and pulling and pushing jumpers. If you’re a good pusher nowadays you’re tough, apparently.”

Stuart praised Tapine for the way he handled the situation. The Raiders have worked with Tapine on his temper with his aggression spilling over in the past.

“One on one, I know whose side I’d like to be on in an altercation there,” Stuart said. “The amount of work that’s gone into Joe Tapine with controlling his aggression and emotions I was very proud of him and how he handled that moment because it could have been very very ugly. I don’t know if I could have handled it the same way Joe did.”