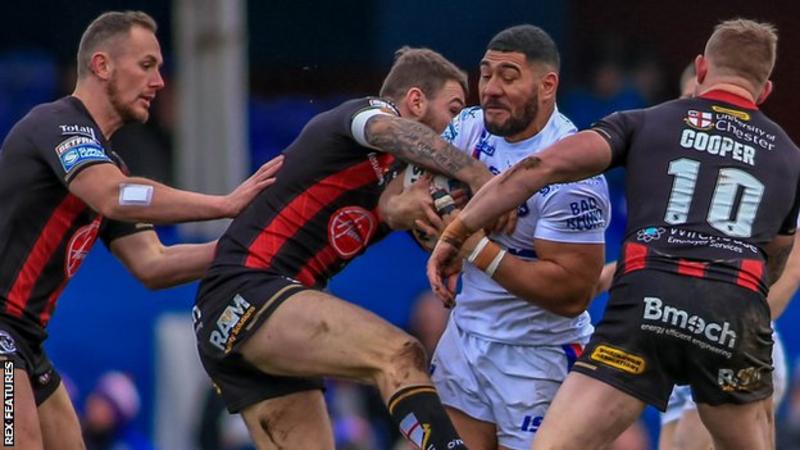 Super League clubs have drawn up plans for the possible return of top-flight action by mid-August.

And the 12 sides are hoping that matches can be played in front of limited crowds from 1 October.

The plans, seen by BBC Sport, will be put to the Rugby Football League board of directors next week.

Three models for fixtures have been put forward which would see the season end in a Grand Final on either 28 November, 12 December or mid-January 2021.

No Super League games have been played since 15 March because of the coronavirus pandemic.

The document, which describes 1 October as the “most optimistic in front of crowds date” that can be planned for, underlines that any restart would be subject to government approval and a commitment to all medical protocols.

And dates and models may be forced to change depending on the trajectory of the virus and any tightening or easing of social distancing measures.

The aim of each model is to restart the season on 16 August and play six rounds of matches behind closed doors, scheduling multiple games at a single venue over a day or a weekend.

The ambition is then for the majority of games to take place after 1 October in the hope of being able to play in front of crowds of limited numbers, depending on the latest social distancing rules.

Results from before the shutdown will stand and any postponed games would have to be played, probably in early August before the general restart date.

How the fixture models would work

Option three would require approval from the broadcaster Sky Sports, creates a potential problem with some player contracts only running to November 2020 and will impact next season, which is currently due to kick-off on 28 January 2021.

It is understood that Sky Sports want a restart by mid-August but there is no pressure on the number of games played. Super League are currently in negotiation with Sky over how much of its current deal the broadcaster will pay, given the disruption. The current deal ends at the completion of the 2021 domestic season.

Restarting the season in August would allow clubs to get the maximum benefit from the government’s job retention scheme, with the current levels of furlough payments due to finish at the end of July.

And whilst keen on playing, they want to keep the financial impact of behind-closed-doors matches to a minimum, hence the scheduling of the majority of games for a time when it is hoped they can allow season-ticket holders and other paying customers back in.