Sydney chairman Andrew Pridham has called for a review into the pre-season draft after the Swans were unable to extract what they believe was market value for rising star Jordan Dawson.

The wingman’s defection to Adelaide has left a sour taste in the mouths of Swans players and officials. They are irked by a system that could have allowed the club to lose a highly valued player for nothing and angry at the manner of his departure.

After considering walking Dawson to the pre-season draft on a matter of principle, the Swans accepted the Crows’ offer of Melbourne’s future first-round pick for the 24-year-old, who had finished third in this year’s best and fairest.

Given the Demons’ on-field power, that pick is expected to fall in the 15-18 range, well short of the No.4 pick of the Crows which the Swans believe they would have received if Adelaide did not have the pre-season draft up their sleeve. 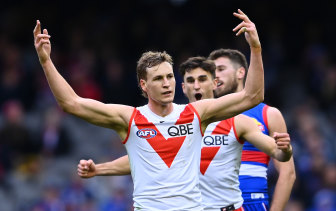 Swans chairman Andrew Pridham has called for a change to the pre-season draft after Jordan Dawson’s departure to Adelaide.Credit:Getty Images

Though Swans football boss Charlie Gardiner said the pre-season draft was not discussed in negotiations, Crows director Mark Ricciuto floated it as an option during the trade period.

“It’s certainly not the way clubs like to do deals – they like to reward the club that had the player,” Ricciuto said on Triple M Adelaide last week.

“But I guess at the end of the day if it [a trade] doesn’t happen, I guess that’s an alternative.”

Though Pridham does not have any issues with the Crows over the deal, he said that mechanism should not be available as that was not its purpose.

“I think it needs to be significantly reviewed,” Pridham told the Herald and The Age. “The whole concept of it doesn’t work when you put it alongside free agency. If you’re a team that finishes near the bottom of the ladder it’s like a smorgasbord of end of financial year sale assets of any player who is out of contract.

“You just threaten to walk them through the pre-season draft. It’s asymmetric the negotiating power they have when they threaten to do that, it’s not right.

“Should a high-value player who is much in demand and wanted by his club who is out of contract be allowed to be walked through the pre-season draft by a team that finishes near the bottom simply because they finished near the bottom? Is that right? That’s what free agency is for.

“If you’re out of contract before free agency, you’re open slather to any of the bottom teams that have got an early pick in the pre-season draft. Simple. It doesn’t sit well with us that that mechanism is available because it shouldn’t be, that’s not what it was intended for.

“It was for players who couldn’t find a home, it wasn’t meant for elite talent.”

The Swans, including Dawson’s former teammates, also feel they were misled by the player, who had publicly indicated in July of his desire to remain in the red and the white only to ask for a return to his native South Australia last month.

Gardiner could not guarantee a new contract for premiership forward Sam Reid, who faces more competition for his spot after the acquisition of ruckman Peter Ladhams from Port Adelaide. The Swans now have strong ruck/forward depth with Hayden McLean and Joel Amartey both progressing this year.